Hug Me Properly screens as part of @Disturbance at Ugly Duck, Bermondsey, 10-12 November 2022, which will also be livestreamed.

Hug Me Properly (2021) is a short experimental documentary, shot on 16mm film, following the lives of a queer community on a night out. They discuss how their loved ones and their lives during a pandemic have changed and how their community is more important than ever.

I wanted to make this documentary because the UK at present is becoming ever more of a transphobic/homophobic country. Transphobic hate crimes have more than quadrupled in the last 5 years alone in the UK, conversion therapy is still legal. During the year since making this film, the conversation around conversion therapy has stagnated with no change in sight. I wanted to document my community’s voices, I wanted to give tangible evidence that they exist; that we exist. If I hold the film, and my loved ones, in my hands, how is the country to deny their existence?

The vast majority of my work often revolves around queerness and class culture. Having a background in cinematography, I’ve shot short films such as Rèvèrence (2020) and fashion promos, Fish Head And Falling Teeth (2021), both being a pleasure to work on because of the connections I felt to the concepts, helping to bring them into existence. I strongly believe connectivity to the meaning of a film can help not only further flesh out the tangibility of the film but help further the necessary increase in diversity behind the camera as well. Shoutout to the wonderful work Trans+ on Screen and The TCC are doing in regards to that). In the past, I’ve also had the pleasure of being a part of the Iris Prize Feature Jury and having collaborated with Making It: Women in Film podcast to speak about Working Class UK Cinema.

During the last few years, I’ve started to self-shoot and direct a series of experimental short documentaries, the second of which was the predecessor to Hug Me Properly. In Presence (2021) I explored the necessity of online connections in a modern and by extension a pandemic world, and I had the joy of it being selected to be a part of the Underwire Film Festival 2022. During the creation of this film, I spoke to a handful of contributors from around the world and saw that there was a correlation among some of them. Some had felt that they had come to terms with their sexual and gender identity during this period of isolation, but unfortunately because of that were thusly isolated and didn’t have the accessibility to connect to others. This created the stepping stones for the creation of Hug Me Properly.

I approached this piece by reaching out to contributors who were a part of my local community, explaining to them my desire to create an experimental documentary where I would get to observe them on a night out while asking them questions about queerness and how they felt in the current time. Because I knew archival was my goal, I decided to shoot the film on 16mm motion film as well as a mixture of MiniDV tape and 35mm photography. I met with some of the contributors for the first time and I feel that the night spent shooting this film will forever stay with me because in the process of wanting to document community I felt I was starting to have my first true experience of a queer community – something I got to partake in, even when behind the camera. Thank you, Well Hung Parliament, @PatButch, The Performance and Ethan. 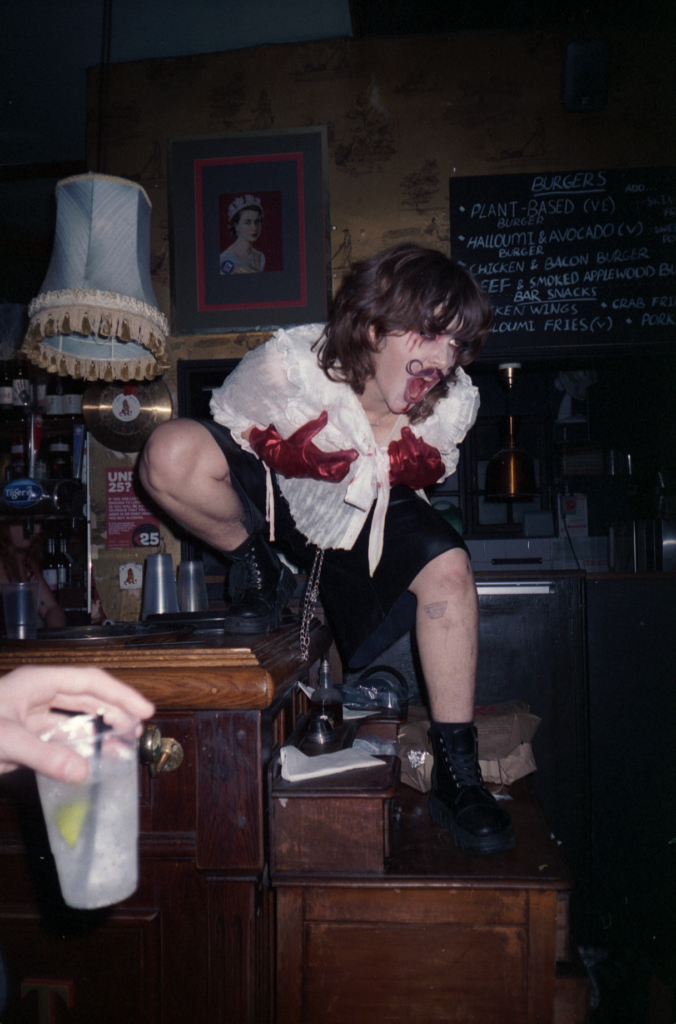 Because of the intimate nature of the conversations that were occurring during the shooting of this project I tried to cultivate a safe and nurturing environment where the contributors could feel comfortable sharing their experiences. I am therefore extremely grateful to them for welcoming me into their homes and allowing me to speak with them. With my love for archival and documentation, I’ve always held the belief of comfort over content. These are pieces of observation, works of love and passion, not journalistic investigation pieces, because I wanted this production to be a completely queer work of art, each person involved identified as such. This was even extended to post-production, where I reached out to Moya Silk, a previous collaborator of mine, who made the wonderful score featured. The graphics featured within the film were produced by The Performance, who is seen in front of the camera as well.

During the COVID lockdowns, certain events occurred that unfortunately had large ripple effects on the queer community. One event, in particular, that was discussed on the night of filming Hug Me Properly was the ‘repurposing’ of the Pride flag into a flag for our national health system. This reuse further prevented the clear identification of safe spaces during a time when safety was immensely needed. Since this has occurred more queer spaces have moved onto using the Progress/Modern Pride flag, which many have discussed as being a good step in the right direction to make our queer spaces feel more inclusive and diverse. It is immensely important that these spaces are cultivated and championed, as places for voices to be heard and connections to be made.

After getting to show my work at some wonderful festivals and intimate screening events this past year I’m grateful to be showing Hug Me Properly @Disturbance at Ugly Duck from 10-12 November. This is my first time participating at an in-person event of this nature after COVID, so it brings me a lot of joy to be able to share my work about queer communities to an audience alongside other fantastic moving image and performance artists. Events like @Disturbance are immensely important in our current climate, giving platforms to a diverse range of artists from underrepresented backgrounds and allowing them to reach out to audiences with accessibility and openness in mind. Having had some of my own formative experiences occur when getting to view and observe collections of queer media (I’ll never forget the Kiss My Genders exhibition at the Hayward Gallery in 2019). I hope that I have cultivated a piece of work that audiences can relate to, not only about the precise experiences that occurred during the COVID lockdowns, but also the desire and the necessity for community.