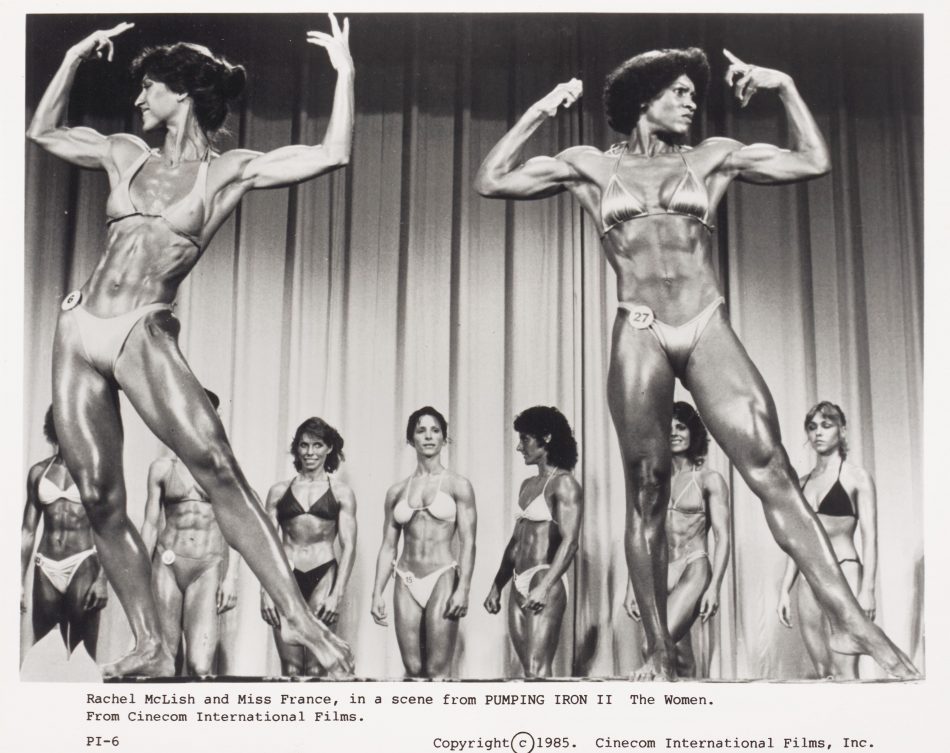 Club des Femmes screening Pumping Iron II: The Women at the Rio Cinema on Sun 6 June as part of Lesbian Camp: Yes It’s F**cking Political. We hope to organise future screenings! And we’ll be talking about our Lesbian Camp weekender on Fri 17 Sept at WunderKammer Live, a free event by Radiant Circus as part of Leytonstone Loves Film 2021, with a zine publication to follow…

The idea for our Lesbian Camp: Yes It’s F**cking Political season started with a t-shirt. A blue t-shirt that had on its front a pink imprint of the Rio’s Pumping Iron II: The Women cinema programme flyer from 1986. I saw it hanging beside the Rio’s box office at one of our Club des Femmes’ film events. Raising funds for the cinema, I bought it, wore it constantly until the colours and imprint started to fade, vowing to myself that one day Club des Femmes would host a new screening of the film at the Rio. 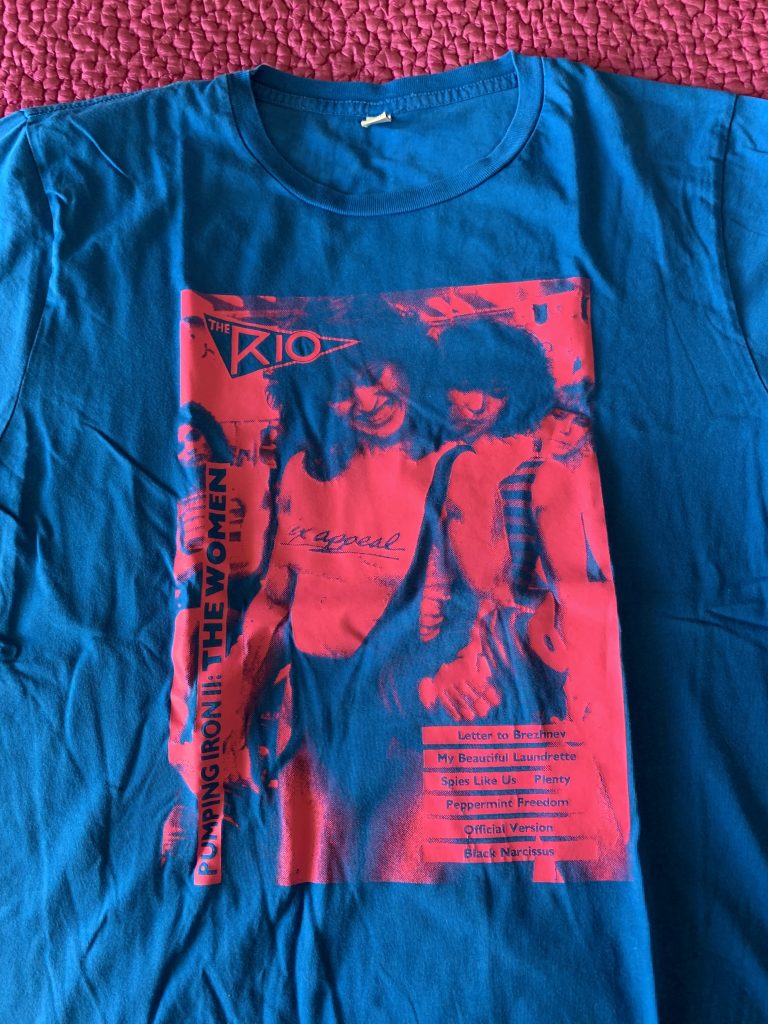 I couldn’t help but wonder what the Rio’s queer audiences might think of the film today, a semi-scripted documentary from the 1980s about a women’s body building competition in Las Vegas. How might the film stand next to and with current queer, trans, feminist urgencies about gender, the body, sport and cinema? Fortunately, we have Annette Kuhn’s invaluable account of attending a women-only screening of the film around the same time and the conflicted theoretical and experiential discussions that ensued.1 Although she doesn’t name the Rio in her text, and has no memory of attending the screening today, Annette’s recent essay for Culture Club brilliantly extends and reflects on the social and theoretical impact of the film at the time. 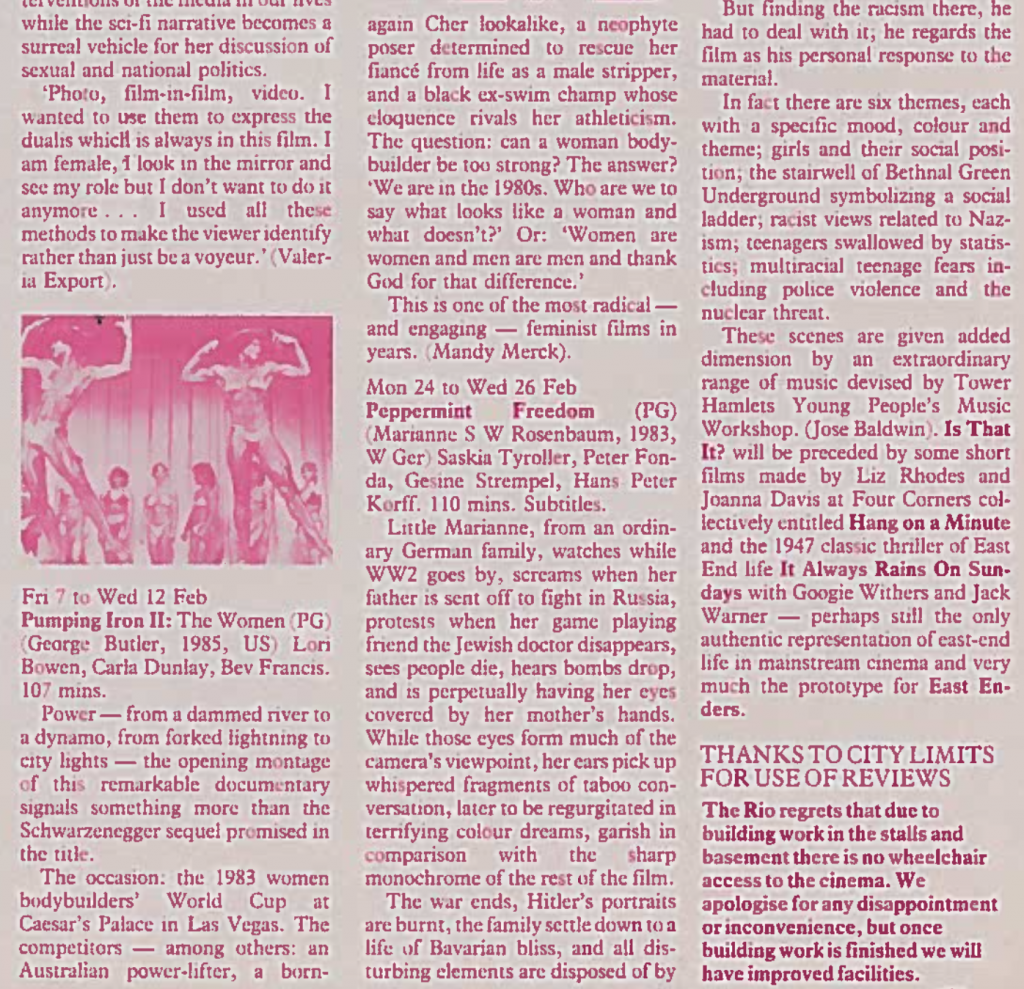 My programming journey with Pumping Iron II: The Women began in the early 2000s at BFI Flare (formerly the London Lesbian & Gay Film Festival). As one of the programmers, I selected the film for a mini season exploring lesbian representation in sport films. Having the opportunity to present the film (as well as a real-life woman bodybuilder) to a packed cinema of dykes and queers was transformative. I can still remember standing on the stage in NFT 2 and those intense feelings of a rookie programmer’s pleasure and toe-curling fear, for in that moment I understood and experienced for the first time the central connection between programming, audiences, identity and queer festivals. In his 1997 Jump Cut article, ‘Spilling Out onto Castro Street‘, Marc Siegel wrote about this as an embodied and cinematic experience; queer festivals, he suggests, manifest as ‘festival[s] of encounter… whether nostalgic, erotic, or informative which combine to create a particular viewing experience’. That Pumping Iron II screening in NFT2 was, in effect, a distinctive encounter that speaks to Marc’s analysis and it subsequently unlocked my passion to keep feminist, lesbian and queer film histories in the cinema through the tools of film programming, activism and archiving.

The Rio in Dalston, London has a long history of supporting radical film culture. In the 1980s, new ideas were emerging about how cinema could be used as a community resource and the Rio (as well as the Ritzy in Brixton) were recognised as pioneers in this respect.  The Rio management comprised of a local committee with a make-up of filmmakers, community activists and engaged individuals. The film programme adhered to socialist principles whilst at the same time committing to show commercial and art cinema, operating within anti-racist and non-sexist guidelines. Within this context, with funding through the Greater London Council (GLC) and Hackney Council, the cinema became a community space and refuge for women’s, feminist, LGBTQ and Black groups and moving image practices to thrive. 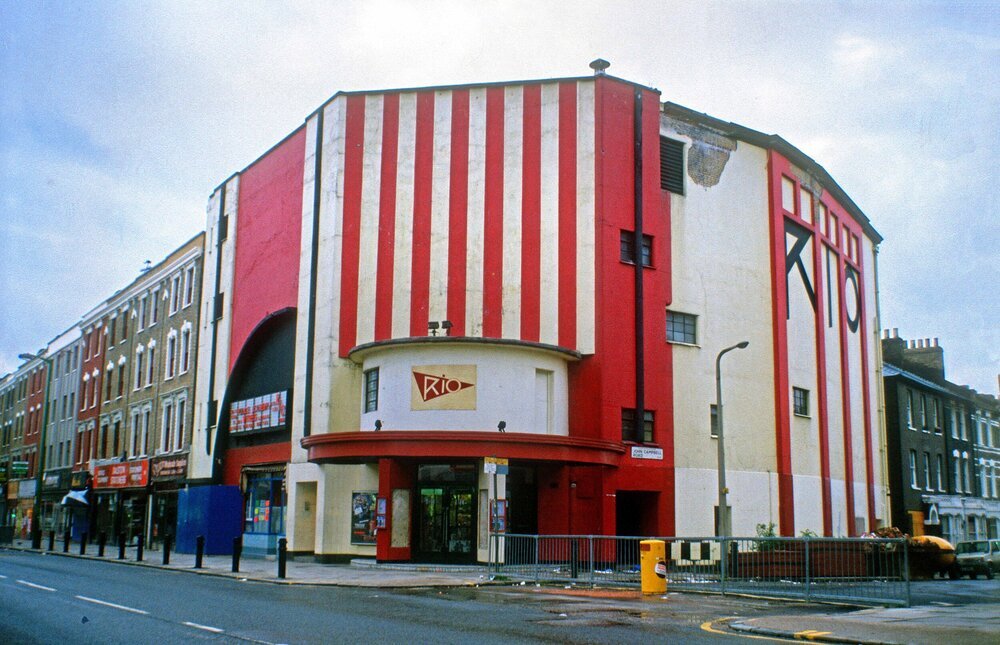 One of these feminist groups was the Women’s Media Resource Project (WMRP) who began working with the Rio in 1983/4. The group was set up to encourage and promote the role of women in audio-visual media. Funded through the GLC’s Women’s Committee (Circles founder member and filmmaker Lis Rhodes was on the committee at the time) the project incorporated The Sound Kitchen, a women-only 16 track sound recording studio and The Video Lounge, a video and film screening and discussion programme. The group delivered an integrated practice, programming film and video and running women only workshops and training in sound and video. 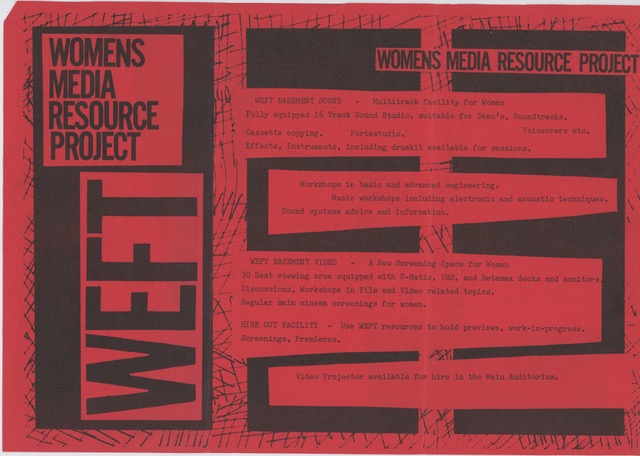 The WMRP programmed and instigated discussion around many of the hot feminist debates of the 1980s, including representation, authorship, aesthetics, and form. They screened some of key films of the decade including The Color Purple, Desert Hearts, Passion of Remembrance and Pumping Iron II: The Women. While there are traces of these screenings in the Rio’s paper archive, what is missing are its textures and contexts, by that I mean these histories’ archives of feelings and experiences, and the cinematic memories of those who programmed the films and the audiences who came.2 Drawing on B. Ruby Rich’s concept of socially informed film curation and criticism to describe feminist film curating and programming as a form of activism and archiving,3 my PhD sets out to construct a new feminist archive out of this historical absence, that tells a story of how women working collectively as cinema workers, programmers and curators shaped a dynamic feminist, lesbian and queer film culture and community in the UK, a legacy Club des Femmes continues to draw on today. My research in the archive is in effect a chance to find out more about Club des Femmes’ pre-history at the Rio, and to generate a sense of connection, queer feminist solidarity and continuity of practice across space and time. 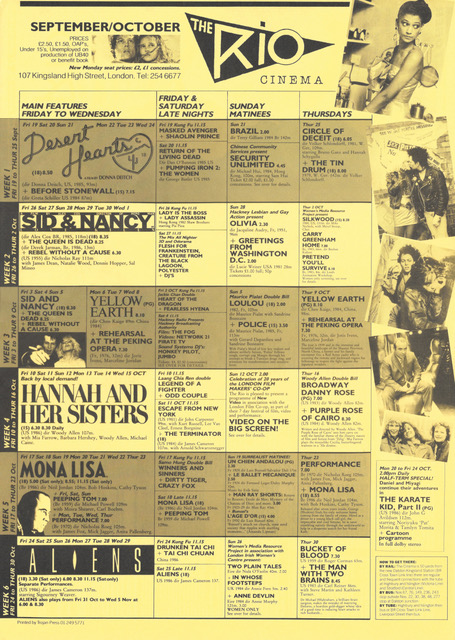 BFI Flare, that t-shirt and my archival research at the Rio culminated in the decision to include Pumping Iron II: The Women as part of my ‘Feminist Re-Imaginings at the Rio 1980-2020’ project, which I had planned to begin in February 2020. A series of public film screenings and community archiving events that were to be held in the cinema’s basement, the same space that the WMRP occupied thirty years prior. I chose these methods of practice in order to activate the Rio’s feminist film histories, as a way to keep the archive’s spatial, cultural and collective memories present. Whilst my supervisors suggested other screening spaces, it was vital that the project be held at the Rio because of these feminist and queer spatial, embodied and cinematic histories. Through ‘being there’ I wanted to explore the materiality of thinking in the archive, the experience of place, drawing on the basement’s architecture and archaeology of women’s material experiences.  Situating the project in a space between the material and immaterial, by returning to cinema, we might then linger a moment and think of the Rio as a place and space for remembering (and forgetting), dreaming, desiring, a place of haunting, hope and solidarity, a place to re-make the world. 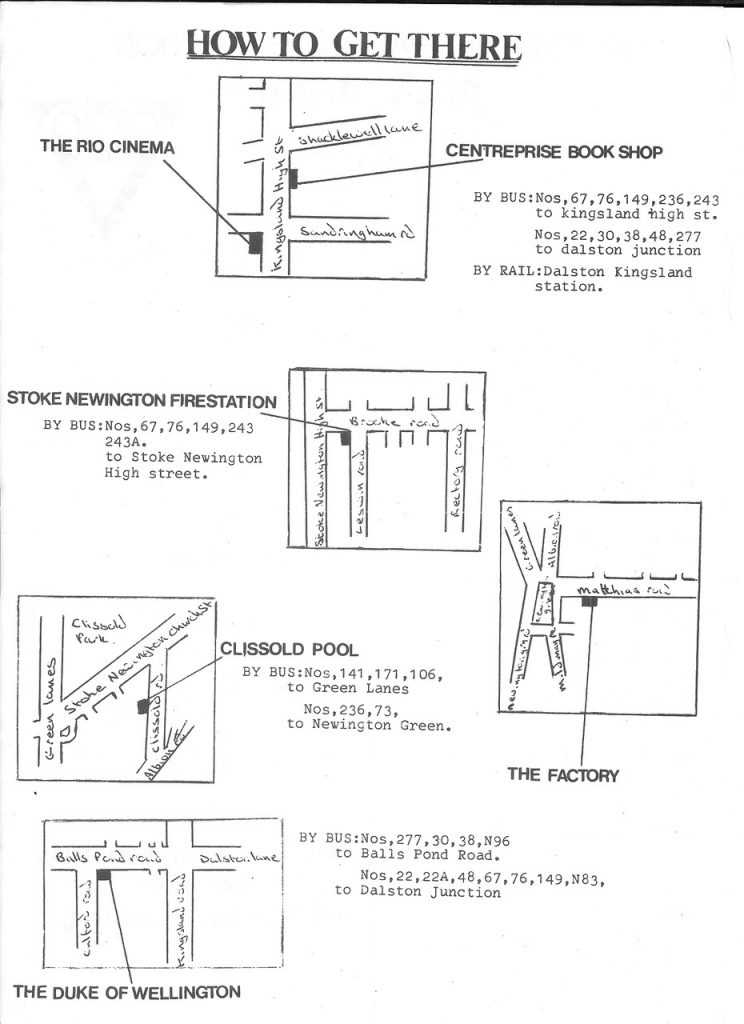 Flyer verso with maps locating the Rio and other venues for Hackney Lesbian and Gay Action events.

Unfortunately, my planned screening of Pumping Iron II: The Women was cancelled due to the pandemic, but the film has continued to act as a travelling companion because we decided to include it in our Lesbian Camp film season at the Rio this past summer. If I think about it now, this curious film about a 1980s women’s bodybuilding competition with its strange mixture of high camp and deep thinking seems to have taken on some sort of talismanic power. Films live on in the memories of those who have programmed and watched them. Each time we present the film to new audiences I remember myself as a young programmer who found her own strength not only in the film’s crazy story but also from the experience of presenting it to queer audiences in the cinema. Maybe the clue remains in the killer tag line written for the original UK quad poster:’The movie with flexappeal’. 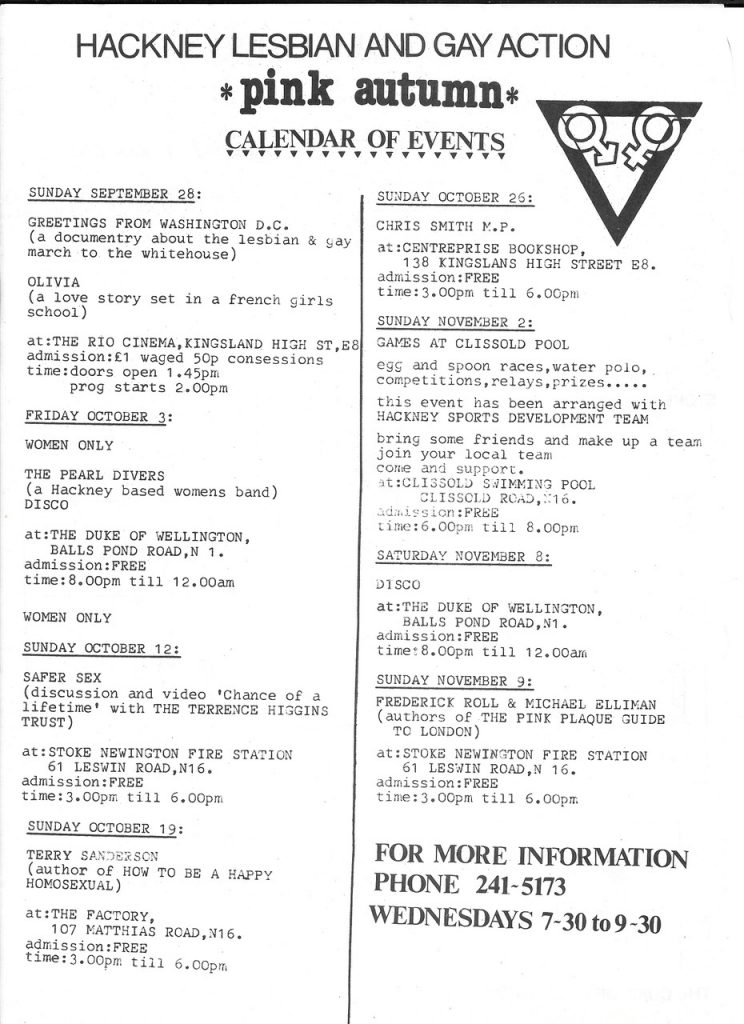 Keeping these queer, feminist and lesbian film histories in the cinema remains vital. Screening spaces and community cinemas such as the Rio continue to hold space for these memories and experiences to exist. Club des Femmes’ archival practices at the Rio points to the value of excavating and passing on these material histories, so that we might learn from the past, make connections and interventions, and continue to connect and create community through alternative feminist, queer curating and programming work.

All assets are © the Rio Cinema archive, shared as part of Selina Robertson’s research.