The Virgin Suicides is available to rent or buy from Amazon and iTunes in the UK, and is on Kanopy in the US. Anna Backman Roger’s book Sofia Coppola: The Politics of Visual Pleasure is available in paperback (£15.95) from our friends at Burley Fisher Books, or check Overdrive to see if you can borrow the ebook from your library.

I first watched The Virgin Suicides in a period marked by the liminality and isolation of adolescence, a mood that has been strangely, unexpectedly resurrected this year. Disconnected from my peers, trapped in both an unfamiliar maturing body and a too familiar hometown, I would barely leave the house, buried deep in my bed, working my way through entire filmographies. It was here that I discovered Sofia Coppola, here that I learned of the Lisbon sisters and their tragic fates, here that I felt the first stirs of recognition. Five young girls, entombed in suburbia, with no way out.

Since those half-remembered, stifled days, I have revisited Coppola’s debut feature countless times, yet nothing has come close to the suffocating conditions in which I first experienced it – until this year. By the end of March, the coronavirus pandemic had swept the globe, the entire country shut down, and those in vulnerable groups – the elderly, the chronically ill, the immunosuppressed – were told not to leave their houses. I ticked two of three boxes. I was back again, deep in my bed, a stack of films by my side. I returned to The Virgin Suicides. For the first time in a decade, I felt that same stir of recognition. 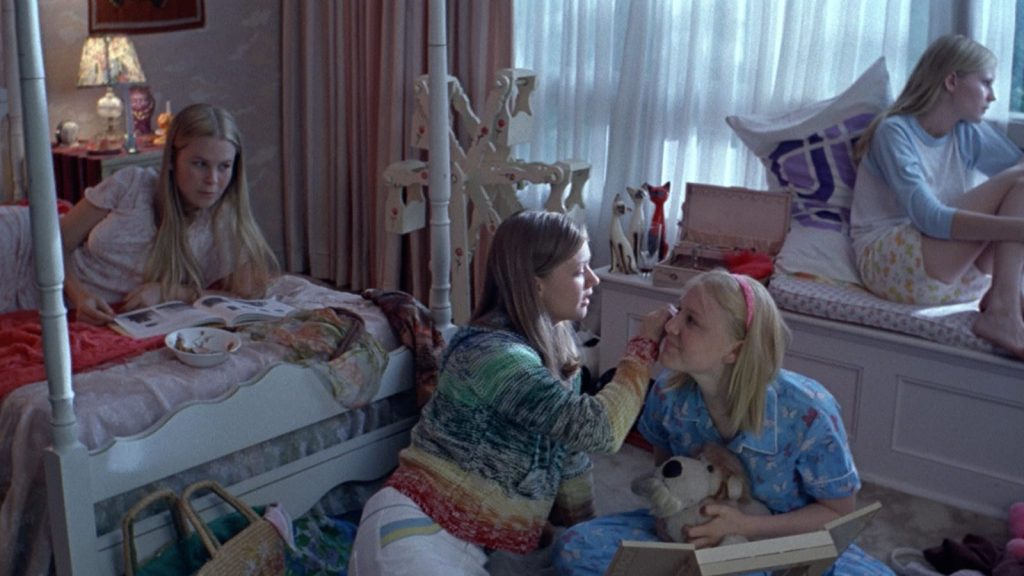 For the uninitiated, The Virgin Suicides is the story of five teenage sisters attempting to navigate the treachery of adolescence and approaching womanhood, who are increasingly confined to their family home by their strict parents, and who all commit suicide by the end of the film. Both Coppola’s film and Jeffrey Eugenides’ original novel are told from the perspective of a group of boys fascinated by the girls, who attempt years later to piece together the puzzle of their deaths.

This male mediation makes it easy at times to hold the experiences of the sisters at a distance, yet rewatching the film in the state of my own strict isolation, I am struck by the headiness with which I feel the sisters’ enclosure, trapped within themselves and their parents’ home as time outside moves relentlessly forward. Coppola’s filmmaking is almost disturbingly evocative, a staleness in the air as the camera pans over the girls shut together in a room, the very light through the windows dusty and muted. In Sofia Coppola: The Politics of Visual Pleasure, Anna Backman Rogers points to the highly visual, aestheticized language Coppola uses in her filmography to convey what verbal language cannot, arguing that “the triumph of The Virgin Suicides lies in its creation of a specific mood and tone that is redolent with the weight of loss.” Nowhere is this mood and tone more explicit than in the Lisbon sisters’ isolation, the loss of freedom made corporeal. 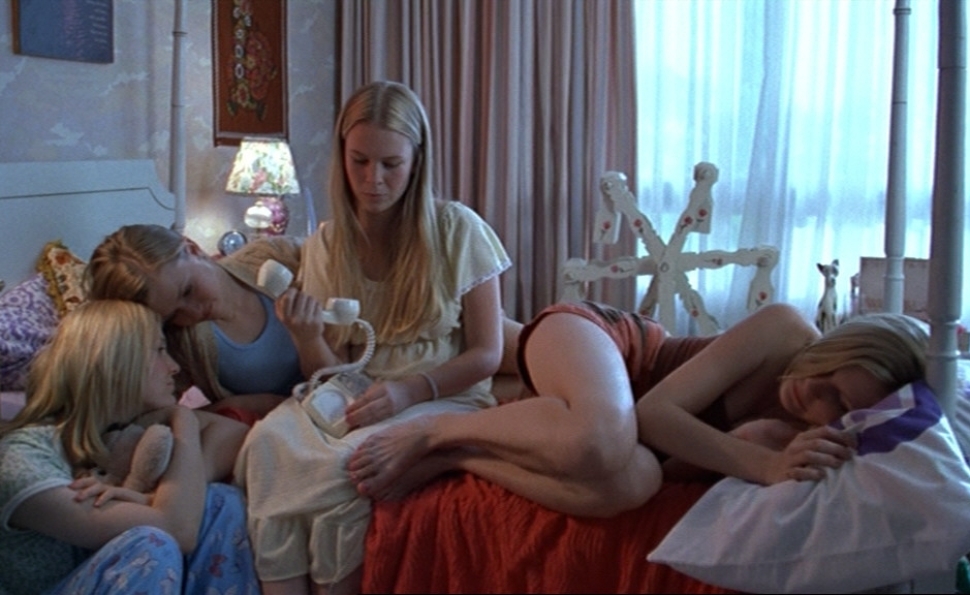 There is a notable lack of dialogue and diegetic character perspective in these scenes of isolation: the girls sit silently, flicking unseeingly through magazines, or staring numbly ahead, gaze unfocused. With the usually predominant sensory experiences of sight and sound made absent or redundant, Coppola visualises a far more visceral sensuality, interpreting their isolation through the tactile and olfactory. Their room and even the stairs leading up to it are cluttered with objects – sheer stockings draped over bannisters, discarded tarot cards, perfume bottles and crumpled clothing littering the floor – their environment rendered simultaneously expressive and oppressive. Somewhere, an old, half-eaten sandwich sits on the floor. The girls are almost always in pyjama shorts or nightgowns, no matter the time of day, a tired mustiness filling the air.

It is a startlingly embodied portrayal of loneliness and isolation that exists both in harmony and strange tension with the girls’ intimacy with one another. The easy familiarity seen in the rare moments that the girls purposefully collide with the outside world – brushing each other’s hair and giggling as they put on party dresses before a school dance – intensifies into a far more bodily closeness in isolation, lying literally piled together, bare arms and legs entangled, stroking each other’s hair, the boundaries between them collapsed. It is a picture of sisterhood in some ways reminiscent of Greta Gerwig’s equally naturalistic Little Women, yet while Gerwig approached these sisterly relationships with the nostalgia of a fading snapshot, Coppola’s vision is messier and more primal, marking out the death of these girls and their bonds with the stultifying decay of wilting flowers. 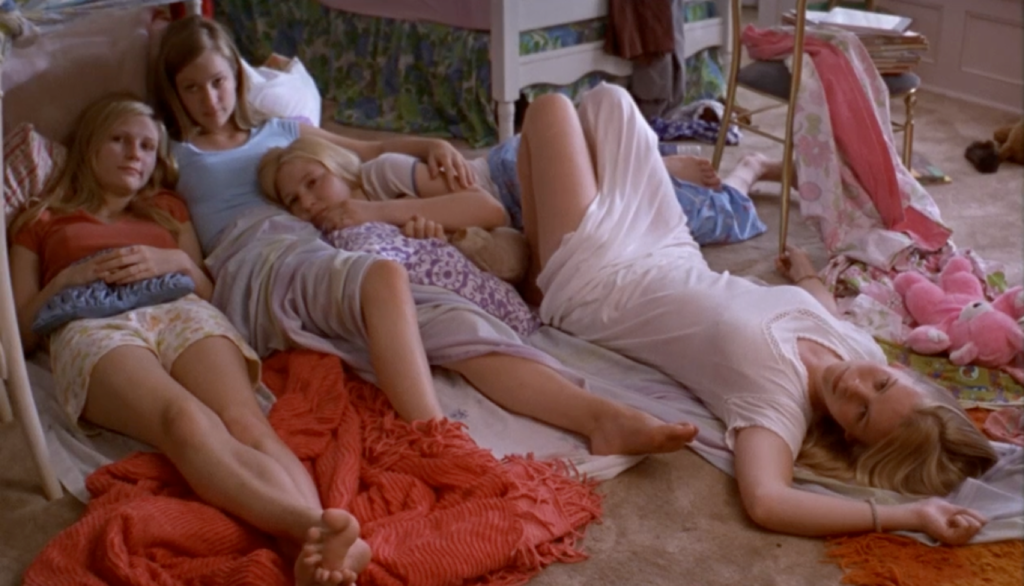 In tying the sisters’ intimacy so strongly to their isolation and imminent deaths, Coppola renders visceral and tangible the very experience of confinement. It is perhaps this, the sensuality of aloneness, that draws me back to this film at this unusual moment in time. In a year of shielding, lockdown, and social distancing, where the spatiality of touch has been made all too clear, I have been forced to confront the ways in which my own isolation is embodied.

I spend months without affectionate embrace, encased in the four walls of my flat, surrounded by the sharp corners of books, shelves scattered with incense ash, overripening fruit in bowls. My only contact becomes the nurse’s fingertips feeling my too small veins for blood, apologising as she is forced to take off her gloves. Having always understood loneliness and isolation as an absence of touch, and having felt the full weight of this myth in my lowest moments, this year – and this film with it – have made me understand the sensuality of solitude, the ways in which the social and the distant are irrevocably physical. 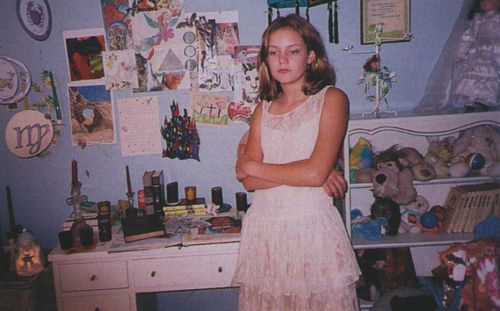 Thinking back to the Lisbon sisters, I am struck anew by how much their lives are defined by both touch and its absence. In the car on the way to the school dance, the girls sit with their dates smoking a joint. “Don’t let it die a virgin,” one of the boys jokes, before he is quashed by his friends. The resonance of the statement in the light of the eponymous sisters is all too plain. Yet Coppola eschews this binary of the female bodily experience – the virgin and the sexually practised, the touched and the untouched – for something more complicated and achingly familiar: the lonely made tangible and the intimate made desolate. Having set out to make a film about the female subjective condition, Coppola has unwittingly given me a language to understand mine.