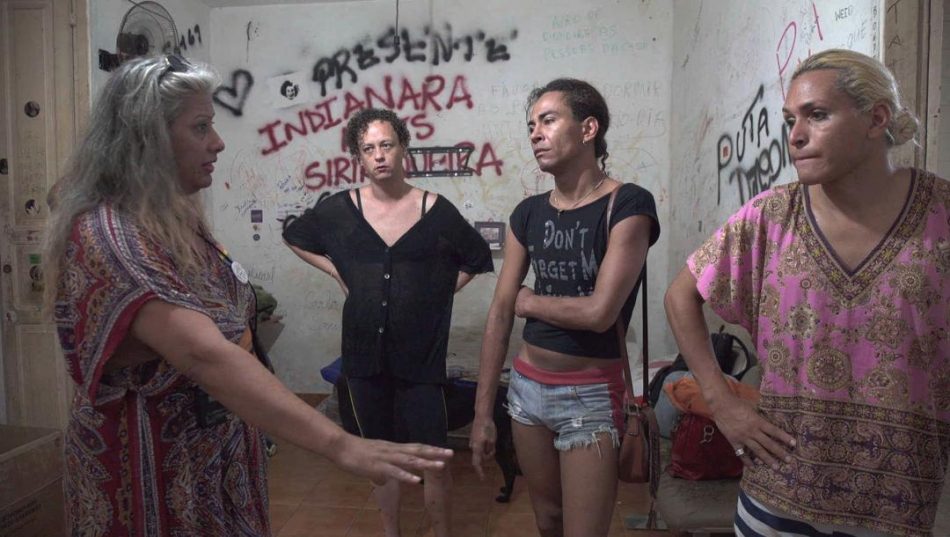 By Hava and Maz @therightlube

Indianara is currently showing in the MUBI library (UK and US) until May 2021.

The documentary opens with a burial. Later Indianara reads from a list of names that she compiled decades ago, names of murdered trans women. She crumples it up and throws it into the trash. They’ve already been filed. More names, more burials, more marches, more losses. Marielle Franco (z’’l) is murdered. Bolsanaro is elected. Indianara says she just wants to stay in bed, which is a revolutionary demand because it requires the entire world to change.

Casa Nem is an occupied house where LGBT people, mainly sex working trans women of colour, can stay and live together. Indianara is the founder. The film is full of shots of the girls hanging out at Casa Nem or Indianara’s place: in a pool, dancing tits out, getting ready or whatever. It’s so rare to see trans women lounging around together and having fun on screen. 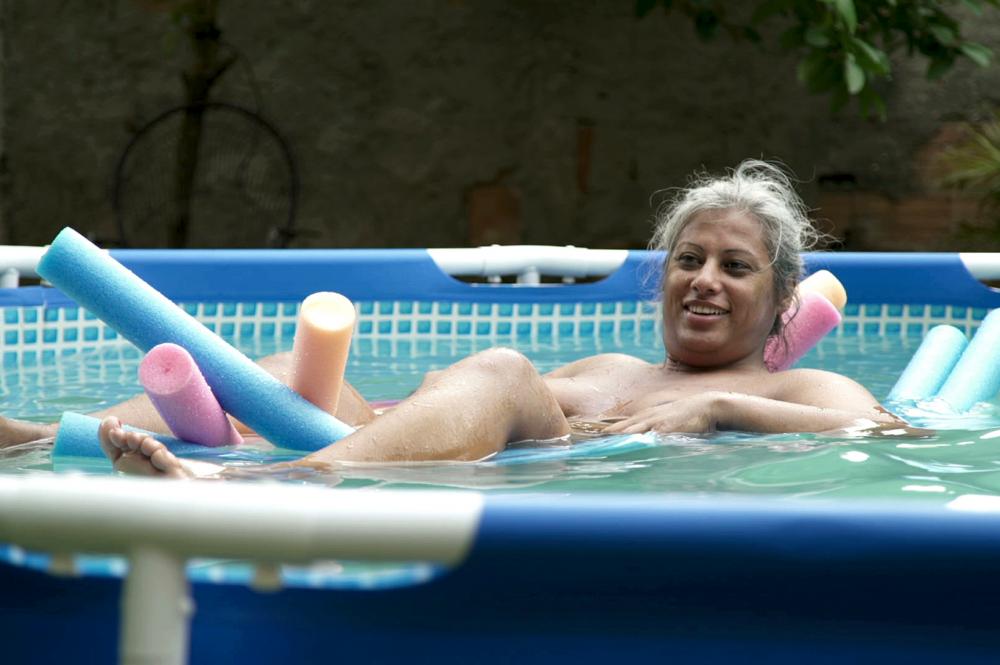 We couldn’t help ourselves, despite knowing it was both projection and at-best a shaky comparison, from wondering where such a space exists in London, in the UK? Where is it, even as a proposal, a plan, a pipe dream? Casa Nem is not the sanitised queer commune utopia of (white) (middle class) imaginations, the ones that get set up in big rented houses and fall apart a year later because people couldn’t get it together to do the dishes, where one’s survival is ultimately tied to one’s amiability. At Casa Nem people argued and snapped at each other. Girls were still out working the streets. The commune existed out of necessity, whereas some have a tendency to exist as fantasies of opting out of the system, creating a perfect world where all of the nastiness of society is kept out. This usually ends up keeping out a lot of the people who’ve directly experienced that nastiness the most, and the nastiness creeps up anyway in places you didn’t want to look. The inhabitants of Casa Nem were not interested in cultivating an idealised sealed world because they are invested in changing the world outside: not only because it is right but because they need it to live.

The PSOL (Partido Socialismo e Liberdade) is evicting Casa Nem. The details aren’t covered in the documentary, but from what we could tell (with the help of Google translate) the property is leased by the former occupants: members of a different collective, who ran the space as Casa Nuvem. At one of Case Nuvem’s events, according to Indianara and friends, a transphobic assault took place and the attendees kept on partying around a trans woman bleeding on the floor. In response Indianara ended up taking over the space and using it to house homeless LGBT+ people, mostly sex working trans women of colour. Casa Nuvem and PSOL accuse Indianara of taking the space by force (invaded, invadiu, is the word they use) and running up debts, and exploiting the young inhabitants of Casa Nem. They kick her out of the party and the house, and leave its inhabitants homeless and searching for a new space to occupy. Fifteen people heave their bags or push them in buggies through the streets. A door opens somewhere else, and the girls get in quick. The door is chained up and padlocked. Between these events Indianara walks her dogs, accepts an award, has a birthday, gets married, speaks at protests, and is tear-gassed. 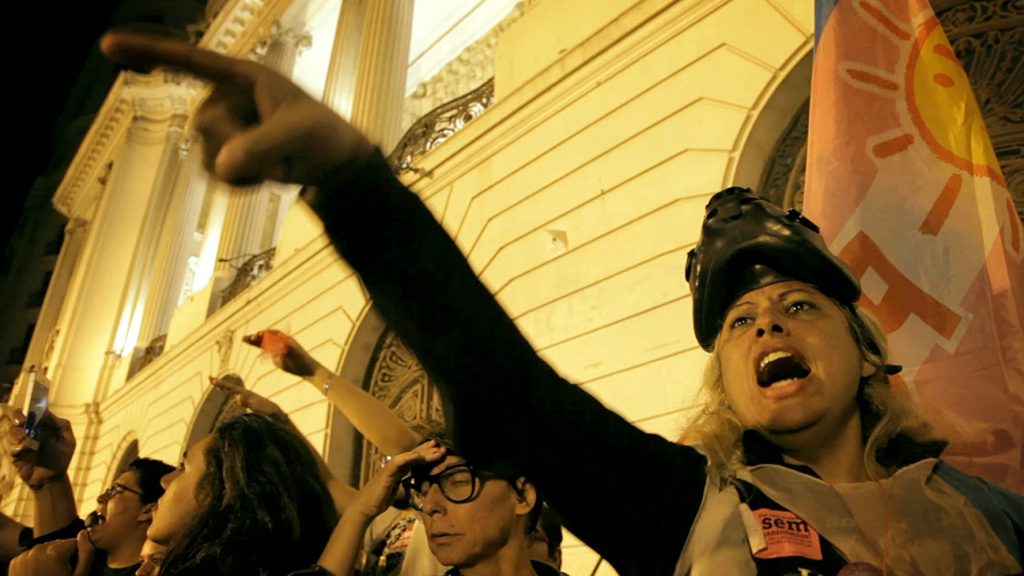 Casa Nuvem, from its online presence at least, was quite recognisable to us despite its distant location and context. Bicycle fixing workshops, queer(?) dance parties, electronic music workshops for women, one workshop once a week for trans people and so on and so on. It seemed much like many spaces that have existed at one time or another in London and other cities, spaces which claim radicality but often exclude those who need space the most (the homeless, the sex workers, the addicts). Spaces in reclaimed buildings or warehouses with a kitchen and some graffiti on the walls. Spaces that Hava, a trans woman, goes to once and never comes back because (at best!) a bunch of cis women tell her that her skin is like, soooo soft. Such spaces are precarious, and we are often cautious to criticise them too harshly when they appear because they are usually better than nothing and we imagine they serve someone. But we see here the fallout when a respectably ‘radical’ space becomes actually useful, becomes a place for queers being worn down to death by the world to at least have a place to eat and sleep, dance and argue, and survive. However lofty we can imagine the desires of the collective who started Casa Nuvem were, the reality of class and capital kicks in when anything threatens it. The owners evict. This is a reality that many well-meaning liberals, academic leftists and would be-radicals choose to ignore, or seemingly can’t understand. That they themselves can act as agents of capital, continually brutalising the people who are most in need of safety. 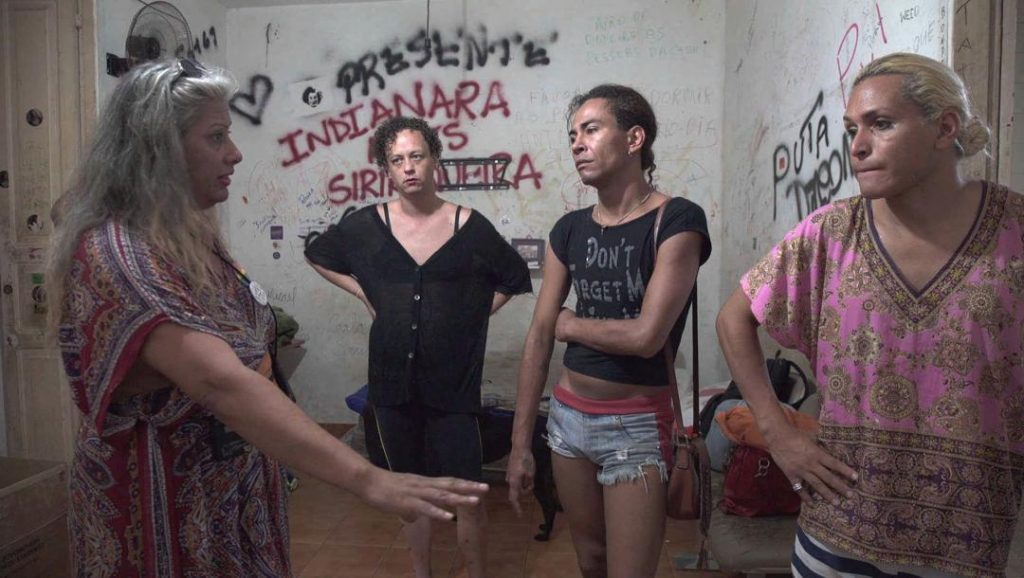 If you own a gallery and some trans women of colour come in and take it over, would you kick them out? You probably would. You should admit that to yourself. If you’d rather not, how about handing over the keys?

Certain cis people like the idea of helping trans people, but don’t like it when help is demanded or when trans people help themselves to what’s theirs – especially if such trans people are at all critical of their operations.

Indianara talks about the continuous marches taking place in Rio, against the coup, against Bolsanaro and imagines where things would be if those crowds had stayed out and occupied space rather than going home to bed and coming out again next week. This, she says, would be the way to revolution – but some people are too comfortable with things as they are to take that step. 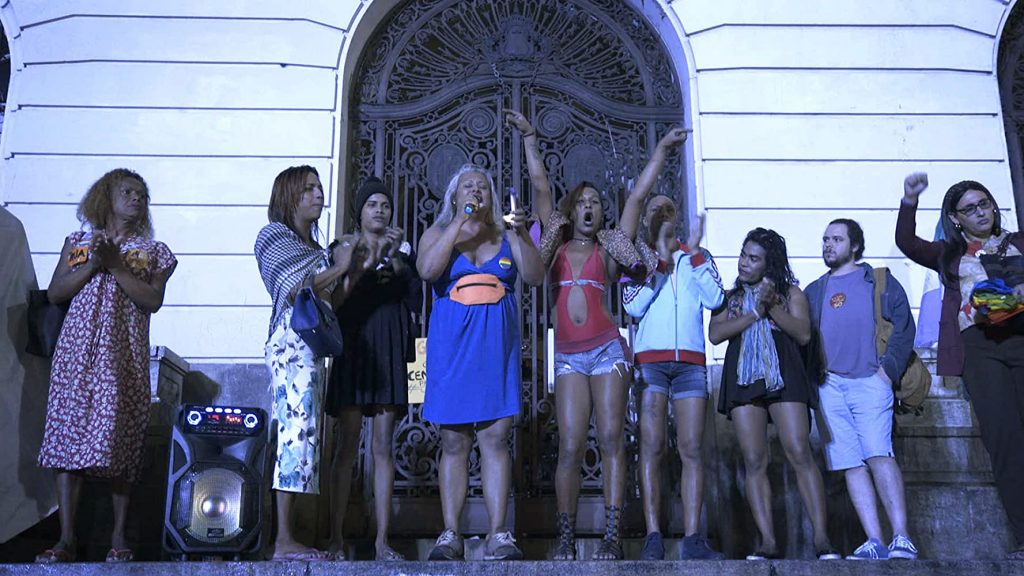 Mauricio, the cis man who Indianara marries in a wedding/street-party, is a hunky babe (and well housebroken!). Indianara is smart, acerbic, funny, manages to pull off a gasmask incredibly well. The girls in Casa Nem party, do their makeup to head to parliament or to go hooking, sing and eulogize. NEM DEUS, NEM MARIDO (No God, no husband) was spray painted on the outside wall of Casa Nem. “I bet Indianara wrote that”, points out Mauricio on the day of their marriage, “No husband… I’m the fucking husband!”. He laughs because we know there’s no contradiction. Casa Nem, the House of Neither.

We know that cis people, white people, those in the Global North (categories we wholly or partly fall under), want so badly to lionise people like Indianara. To fête her, and so to put the struggle onto her shoulders. To outsource the work of revolution to the most oppressed. To single her out and individualise her both to take her from community and to erase the other trans women and femmes that we see in the documentary. We aren’t from Brazil, we have never visited, we can’t speak of the struggle there. We don’t want to assume the conditions of the day-to-day. It’s easy to fall into the trap of fetishising someplace, of orientalising it. But what jumps out for us is the unending work of staying alive as a trans person, the duty carried by staying alive to remember, and the duty to fight to make it easier for the ones who come after us. To do all this under facism. What a fucked up thing, to be handed down this impossible task to both attack and defend to such extremes. Indianara gets out of bed, and does the work everyday – partly perhaps because others stay in bed. The question remains: how long, how much more, until we can all just stay in bed?