HISTORY AND MEMORY: FOR AKIKO AND TAKASHIGE is available to stream for a limited time at Vimeo, thanks to Rea Tajiri.

There was this place they [my family] knew about. I had never been there, yet I had a memory for it.

– Rea Tajiri, in her voice-over.

I have been thankful, during social isolation, for the generosity of the many media artists, especially women of colour, who have shared their work on the Internet. Among them is Rea Tajiri, whose classic, half-hour experimental documentary video, History and Memory, has long been hard to see outside of art spaces and classrooms. I honestly cannot think of another short-form moving-image media work that performs such a profound philosophical intervention in the cinematic writing — and re-writing — of history while remaining so piercingly personal.

Almost immediately after its first appearance in 1991, Tajiri’s video began to attract strong interest from writers and scholars in multiple fields: feminism, documentary studies, experimental film. It also came during a great period of flowering for Asian-American film and media, which is the focus of a special dossier in the new (open-access) issue of Film Quarterly. Three decades on, the video has remained fresh and radical — and is ready for the larger audience, especially in Internet film culture, that it deserves and would embrace it.

The iconic heart of History and Memory is an image of a woman filling up her canteen on a hot and dusty day in the desert. The viewer can almost feel the coolness of the water as it splashes on the woman’s face. The image is a re-enactment in which Tajiri plays her own mother. Returning like a refrain, the shot haunts the entire work.

120,000 Japanese-Americans were imprisoned in internment camps during WWII in the aftermath of Pearl Harbor; the filmmaker’s mother was one of them. She was sent to a “relocation centre” (as the government euphemistically termed it) in the desert in Poston, Arizona. The image represents a story Tajiri’s mother told her when she was a child. But when asked about it as an adult, her mother had no recollection of it. Tajiri’s re-enactment was intended as a gift of memory for her mother.

When she set out to make History and Memory, the filmmaker was driven by two impulses: she wanted to learn more about her family’s experiences before she was born, and she simultaneously wanted to question which narratives selectively count as “history” and which do not.

The video cannily juxtaposes images from disparate sources in order to reveal how history is written. First, there is “official history”: American newsreel footage of the Pearl Harbour attack; images of the event taken from Japanese airplanes; the US Navy’s counter-attack from John Ford’s documentary December 7th; and excerpts from a US propaganda film that tries to sanitize Japanese-American relocation.

Next, there’s what we might call “unofficial history”, written by mainstream culture: clips from popular, star-driven Hollywood films such as From Here to Eternity (1953) and Yankee Doodle Dandy (1942); and Alan Parker’s sentimental Come See the Paradise (1990), which centres the white male protagonist (played by Dennis Quaid) rather than internment camp survivors. Both official and unofficial histories are dominant histories, authored and authorized either by the state or by the mainstream-media industrial complex.

Tajiri’s video counters these dominant images by proposing — and performing — new images and narratives, in the process writing a counter-history. She does this by marshalling home movies, archival photos, voice-over, and onscreen text to convey autobiographical accounts that are braided in a thick, audio-visual weave. It is an example of what Marita Sturken has called “cultural memory”, which springs from individuals — frequently women and people of colour — intervening in the process of history-making. 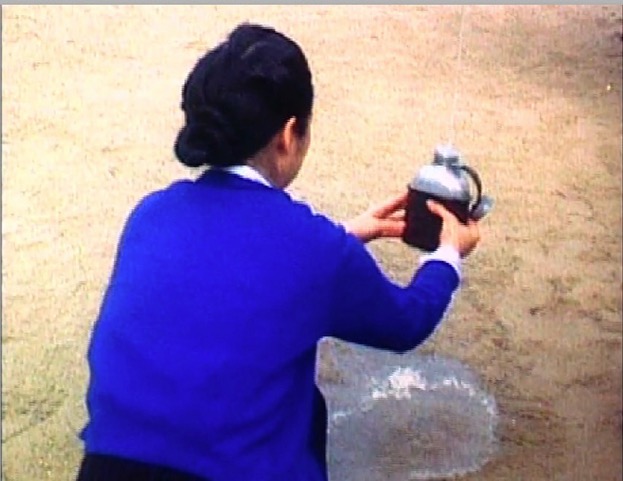 Not only history-making but memory-making too. Marianne Hirsch has coined the useful term “postmemory” to capture the impact of events, especially traumatic ones, that are transmitted inter-generationally to people who have not experienced them first hand, but who nonetheless develop an imaginative, projective “recall” of them. A preoccupation with memory, she adds, is especially strong for those populations, such as women, who have been marginalized by dominant histories.

Tajiri says in voice-over, “I remember having this feeling growing up that I was haunted by something, that I was living within a family of ghosts.” In giving expression to this haunting, her video becomes an act of memory construction that transcends the personal by finding affiliation with all other imaginative gestures of cultural memory that collectively refuse top-down history.