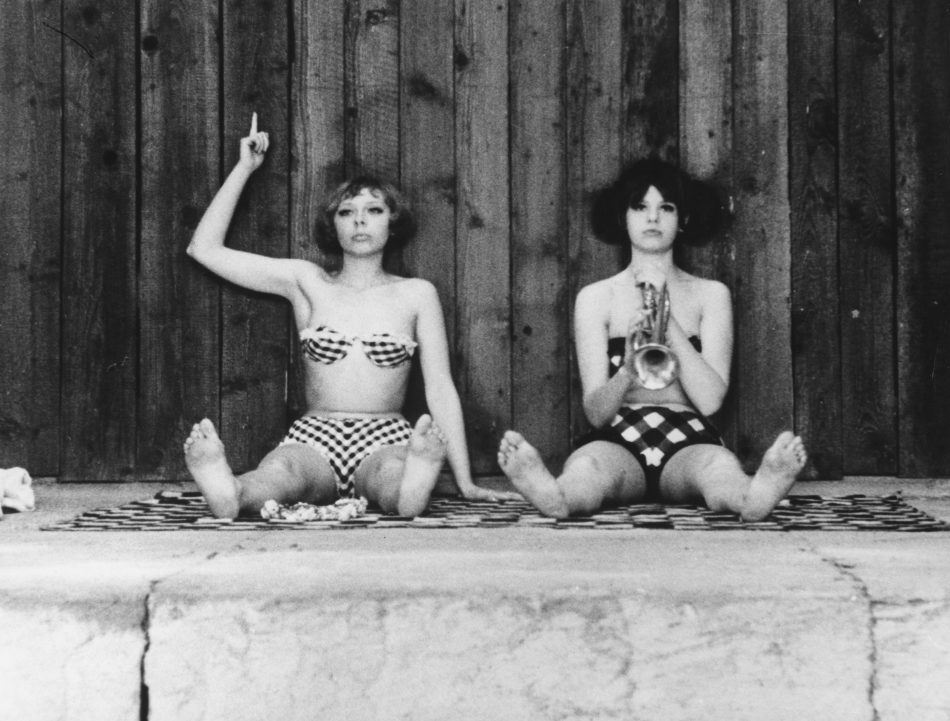 Daisies is available to stream via Second Run’s new Vimeo on Demand service, £4.99 for one week rental.

Andrea’s films Taskafa and Estate: A Reverie are available on DVD from Second Run.

Rebel Women, a Radical Refusal: Scenes from the Class Struggle in Haggerston, Hackney

When your tongue can taste shadows and your friends are shedding tears,

That’s when you know that hell is empty ’cos all the devils are here.

– Kae Tempest, “What We Came After” [watch here]

The time of writing is always crucial to how one thinks about the subject of one’s writing and I am writing this peace during a major global pandemic, the ongoing ideological and embodied contagion of racism, ableism, hetero- and gender normativity, threaded in with numerous other crises (economic, ecological, social, and otherwise) that infects the body politic on a daily basis. To continue to voice complaints against the ‘bourgeoisie’ in this landscape seems entirely viable and feasible and necessary. Daisies remains relevant and provocative as it refuses to allow that fantasy mind-set to dismiss and demean those (i.e. the overlooked, the poor, the bench drinkers, my friends and community) because they don’t fit into the bourgeois framework.

At its heart is women’s shared resistance to the unbearable advertisements, promotions and forgetting machines of bourgeois life. This is something that has energised me on an ongoing basis for as long as I can remember. There are always situations that can be identified, challenged and resisted, primarily because of their complete lack of priority in contemporary existence, i.e. their triviality. On a daily basis in our contemporary experience we see trivialities on a pandemic scale being rolled out as justification for urgent action or significant focus, when of course they are anything but, and properly obscure, or persistently mask core structural issues. 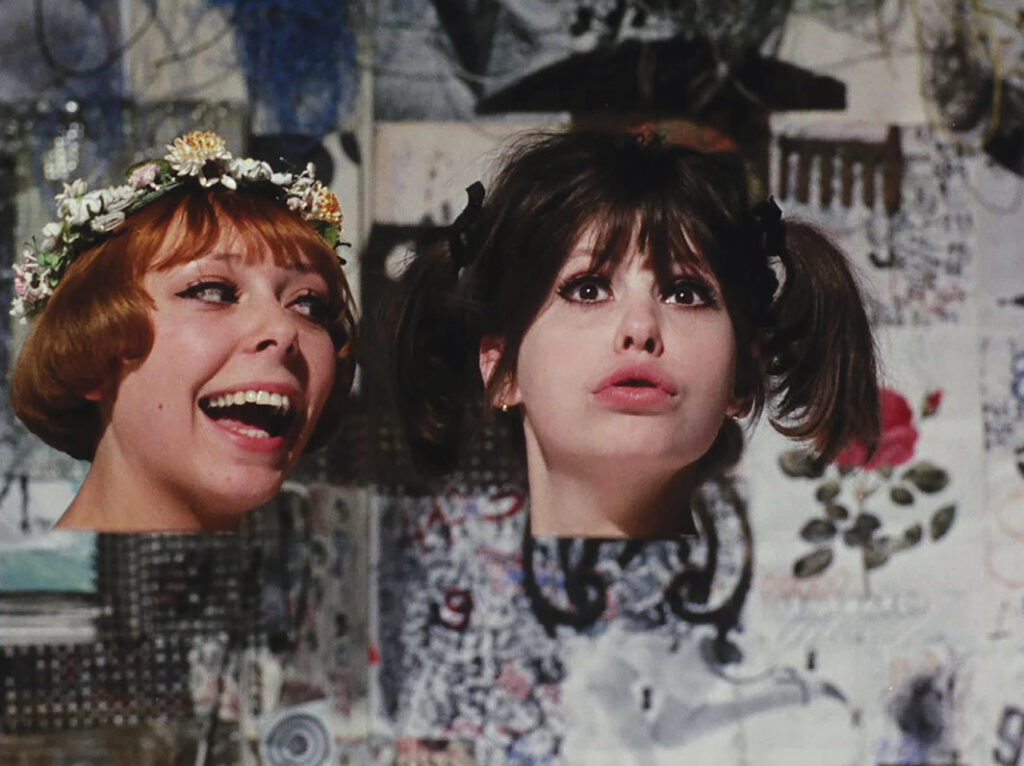 It is a film of levity and yet this does not, of course, stop it being deeply serious. It is culturally anarchic. Its protagonists are hustlers, disruptors, tricksters without ‘agenda’ other than that their very being is a turbulence to the status quo. In prior days, I would have called for more tricksters, but now the crown trickster is Trump, and we need to activate the agendas for change that have always been evident.

The close of the film is shattering and raises two fingers at those who are upset about a trampled salad bed; who have forgotten, if they ever knew, what violence is, actually is. Their bodies cannot imagine, what other bodies may have to endure, still, until there is radical and lasting change, based on the kind of social and political vision we see proposed and advocated by an anti-discriminatory feminism. 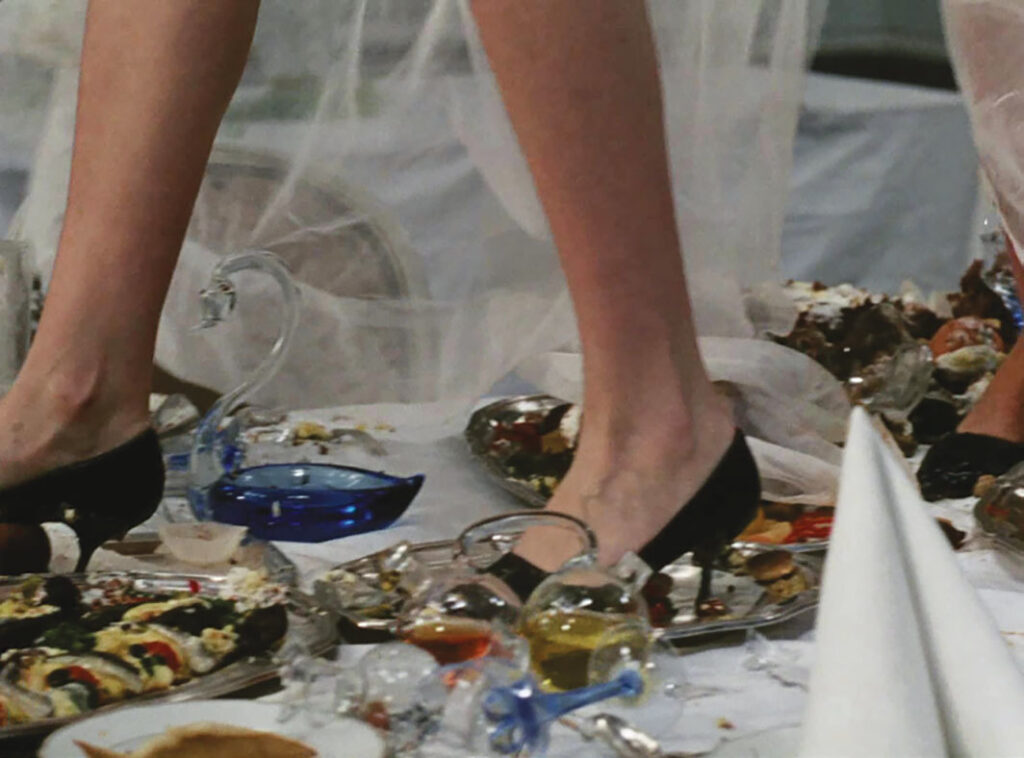 In this context, Daisies allows one to imagines scenes that one has witnessed oneself as part of its ongoing endless never-to-be-finished edit in one’s own life. Here are a couple of examples that I could not consider without the invigorating rigour that Daisies brings to my perception of reality.

1: “Parrot is not the right sound”

The first scene features my dear friend, a queer older woman. Some years ago, she rescued a parakeet, which I borrowed for a scene in Estate, a Reverie. This creature co-habits alongside several cats, two budgies and a big dog. My friend lives in a ground floor council flat, adapted for her particular health needs and, each year, when the sun shines, she takes her birds out, to sit with them in her tiny garden. On the other side of the road is a brand-new luxury apartment block, occupied by mostly young ‘professionals’. The corner of that block faces my friend’s place. Lockdown happens. 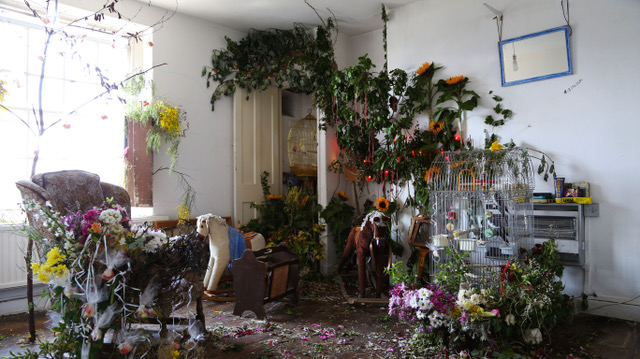 From Estate: A Reverie, by Andrea Luka Zimmerman.

The occupiers of three floors of the luxury block complain about the chirping of the bird. They say it disturbs them being able to work from home during lockdown. They cannot concentrate. They do this by calling the council. They collect evidence by entering my friend’s garden without her permission and photographing the parakeet who is sunbathing with her. She is hard of walking and so by the time she got up the intruder had left. My friend went to speak to all her own neighbours and asked if the bird disturbed them too. “What bird?” said the first. “It makes me happy when it chats away,” replied another. “I love birds” said a third. Yesterday a strangely ‘photocopied’ letter from the council arrived, claiming to be a community nuisance order, but it was unsigned and directed at ‘the tenant’, not her name (which, since she is a council tenant, would have been standard).

My friend called the council and they had no such order on file in any department… my friend, who has just come out of hospital, now has to put in a harassment complaint.

I walk into my local park with Ella. Somebody picks up their small boutique dog. “Did you pick up your dog because of mine?” “Yes, because my dog cost £3000”. In our neighbourhood, but in particular on our demolished and now rebuilt estate, we can see the changes made by gentrification foremost not by the changes in cars or clothes or hairstyles. It is the dogs that mark the change more than anything. Generally, what once was once the majority canine population (Staffies or variously shaped cross breeds) has now been replaced by almost exclusively smaller dogs, and pedigrees (Dachsunds, Frenchies, Iggys, numerous kinds of -doodle, etc.). Being practical, even generous, one could say that this is because it is easier to have a smaller dog when one lives in a flat. 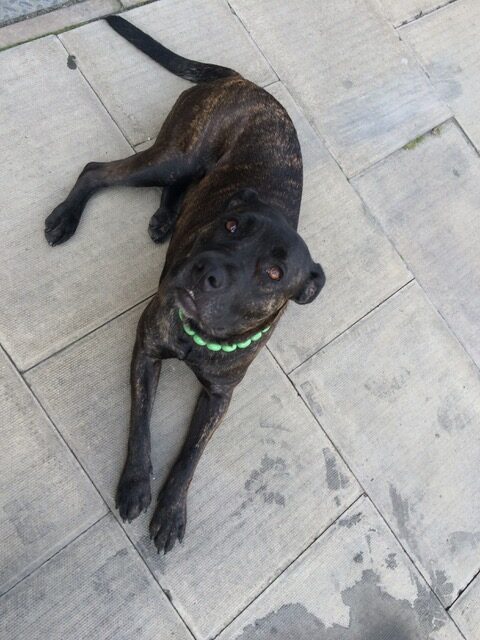 I know that a dog’s ‘reputation’ does not necessarily match the dog’s temperament. In fact, the dogs are used as a means to discriminate against a certain kind of person. Sometimes the owners of the smaller breeds speak to me, or to my neighbours with dogs similar to mine, and find out that we are writers, or filmmakers or whatever is ‘acceptable’, that they did not expect, and they start visibly to relax. And then they have no problem telling me this, even.

What this country needs is more unemployed politicians.