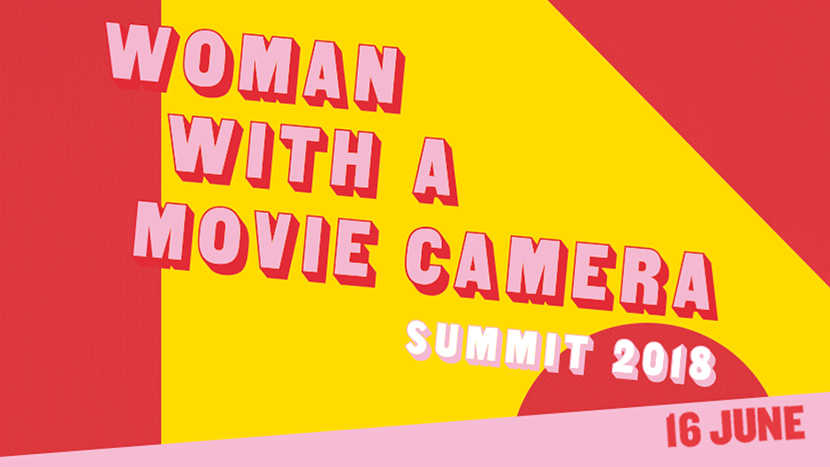 Jenny Clarke is a film curator. She watches short films for festivals, she loves feminist work, queer films and slime videos. She is a member of Club des Femmes.

First a note on absence. The absence of Munroe Bergdorf as voice as a keynote speaker, had a profound effect on my experience of the Woman with a Movie Camera summit. This was emphasised by the speakers who gathered on stage in NFT1 who pointed out that none of them could offer a substitute for Munroe’s voice and experience. They stood in solidarity with Munroe and as a show of support for the invitation to have her speak at the event, just moments after curator of the day Anna Bogutskaya had introduced the summit, noting then when we are talking about women in the film industry we are also talking about power. Without Munroe speaking about her experience of global activism, a key point of view in the discussion of power was lost, and while the absence could not be filled with anyone else’s experience, it was a wake-up call of sorts, a reminder that the power of hatred and transphobia are still present and as feminists our work should be fight for equality for all and so this kind of hatred and bullying has no place in feminism.

The question of power, incited by Anna Bogutskaya and the following speakers, have persisted with me as I look back on the day. The summit itself was made up of around 20 events and 8 extra curricular exhibits – all of which took place within an all too short 6 hour period. These time constraints meant I was only able to attend a handful of events and that I left the BFI feeling like I had missed out on a lot of things.

I attended three panel discussions, all of which were inclusive spaces, featuring interesting exchanges of ideas and practices. Each panellist provided an example of feminist work and interventions into the film industry.

The panel on Feminist Cinephilia Activism, featured Black Femme Film, The Bechdel Test Fest and Reel Good Film Club, hosted by Anna Bogutskaya who was also representing The Final Girls. The panellists shared a goal of bringing underappreciated films to life by intervening into the cinema experience. The panel on New Girl Media, had a similar vibe, with each panelist talking about their individual experiences in creating publications that reflected themselves. The panel entitled Before and After #metoo and #timesup, was a complex discussion about the shifts in the power structures of Hollywood, after the coming together of activism and social media.

For me this panel felt the most needed, after everything that has become public knowledge in the last year, and the very fact that the social media although hugely important in connecting voices, having a chance to come together and talk everything out, seemed like a very good opportunity.

However, I found myself very conflicted about the panel itself. The initial discussion which echoed Anna’s call to examine power in the industry, with Mia Bays noting that trauma is messy which makes it hard to find neat solutions. There was a general acknowledgment that social media has redistributed power and created a community from previously isolated and powerless voices, but sadly no real conclusions were made about taking that activism offline. With a reminder from Holly Tarquini that although a few men have been unseated, the power in the industry still remains in the hands of white cis-males.

One thing I noticed about my experience at these panels, was that I felt very much like I had heard this all before, probably because I have been attending feminism x cinema events for a few years now and am mostly familiar with the names, faces and ideas that continue to crop up. So it was refreshing to hear from Ellen Jones, the youngest member of the panel, whose uses her youtube channel Queeries to create spaces for other people from the LGBTQIA+ community. Her knowledge of social media and her own experiences of the power dynamics of youtube and algorithms brought as whole new perspective to the discussion of social media activism and representation.

Frustratingly, despite an initial invitation from the speakers for the audience to join in the day’s discussions, I found the Q+A time too short, allowing for an average of 3 questions at each event. At the panel for New Girl Media, this few questions from the audience revealed a desire to access more practical knowledge about publishing; asking how much money they would need to print? Or how to deal with the stresses of self-funded projects? The panellist gave good answers, but I did wonder if a workshop or at least more time for an in depth discussion about practical things might have elevated this particular event. In the #metoo #timesup panel, the short Q+A time revealed a more problematic element. The final question came from a young aspiring filmmaker who was asking about the impact on the #timesup movement for her future career; I felt the panellists relied on some old tried and true advice including challenging the question asker to refer to herself as a filmmaker (rather than ‘aspiring’) because ‘that is what a man would do’ or encouraging her to ‘go for coffee with someone’ because networking is how the industry works. Which, is the same kind of advice I have been hearing for a long time, and while I admit being confident in my work and calling myself a film curator rather than an aspiring curator has benefited me. However, I felt after a long discussion about the abuse of power by ‘men’ to advise a young filmmaker to follow the same path we have always followed, a path created by an abusive system, seemed ill-considered. I did in fact want to question their advice at the time and raised my hand but there was no time to hear from me.

After a tricky choice between Jemma Desai’s talk on “PYNK until we all go insane”, which appealed to my love of Janelle Monae and interest in pop feminism or So Mayer’s spicily titled ‘Blowing up the canon’, I went with So. I was sure both talks would be engaging and introduce me to new ideas and I was said to miss out on Jemma’s talk (I’m not sure if the BFI recorded the talks?), but I am very glad that I chose So’s talk. Not only did they deliver an interesting talk centred on the tools we could use to dismantle the film canon, but they also succeeded in shaking up the speaker/audience dynamic in the BFI, which for most of the other events conformed to the usual format of formal discussion on stage and polite attentive listening in the audience. 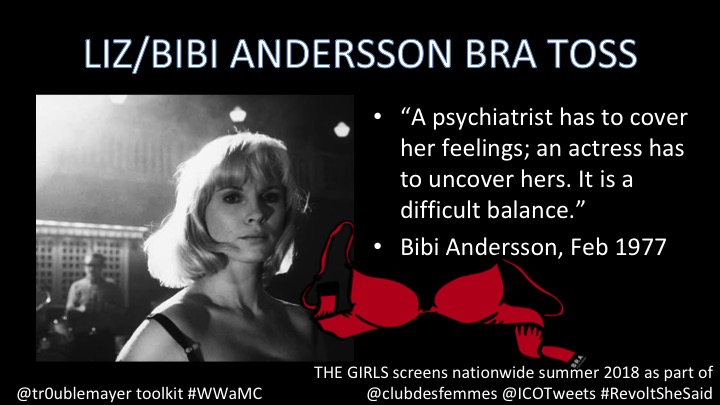 So began with a clip from Maî Zetterling’s The Girls (Flickorna, 1968, now touring the UK as part of Club des Femmes’ summer Revolt, She Said film tour), featuring Bibi Andersson’s (and the rest of the ‘girls’) aggressive, confrontational strip show. So then channelled this spirit into their own defiant stripping first of the garb of a film curator then of a series of slogan t-shirts. So went on to define ‘Bibi’s bra toss’ as a performative speaking out, a tool that has been used by feminists for years, but is still a fundamentally useful one. So’s talk was a demonstration of this tool in action, a performative, fiery, speaking out, which demanded the attention of the audience. So’s talk in fact made full use of all the tools they offered, it was a masterclass in feminism in action; for example “Asia Argento’s Finger” the tool of pointing directly to the problems, which So immediately enacted by pointing out that the BFI had just recently appointed 4 white cis-men to their board. This act of finger pointing was unique during the summit where most people preferred to say “not to say anything bad about the BFI”.

Along with So’s dynamic performance, they shook up the space in NFT2 by demanding not only the attention of the audience but also action. Each tool presented had an accompanying gesture, which So performed and asked the audience to as well. We the audience held up fists containing spanners to throw in the “rape machine” or balancing scales to deliver Ruth Bader Ginsburg inspired true equality not just 50/50. These actions were crucial to So’s talk, as an audience member in a cinema space, you expect to sit politely in the dark until Q+A time, but here we were encouraged to move and act alongside So. It was a weird experience, not least because for “Asia Argento’s Finger” I discovered that putting my middle finger up was not a natural gesture, one that I had to think about, it being so long since I last did it. But this weirdness was powerful, I was reminded of my first encounter with the work of Fluxus at an art school lecture when I discovered that artworks weren’t restricted to objects or gallery spaces, they could be created anywhere even in the absence of the artist. In NFT2, So’s gestures turned the passive audience into active participants, warmed up and ready to start working with these tools.

So’s slideshow of the tools are available to download here.

For me the Woman with a Movie Camera summit was a long overdue coming together. It was a chance to revisit both the negative and positive aspects of cinema’s past, to discuss the triumphs and struggles of the present and a keen reminder that to build the future, that we collectively dream of, we need to get to work.