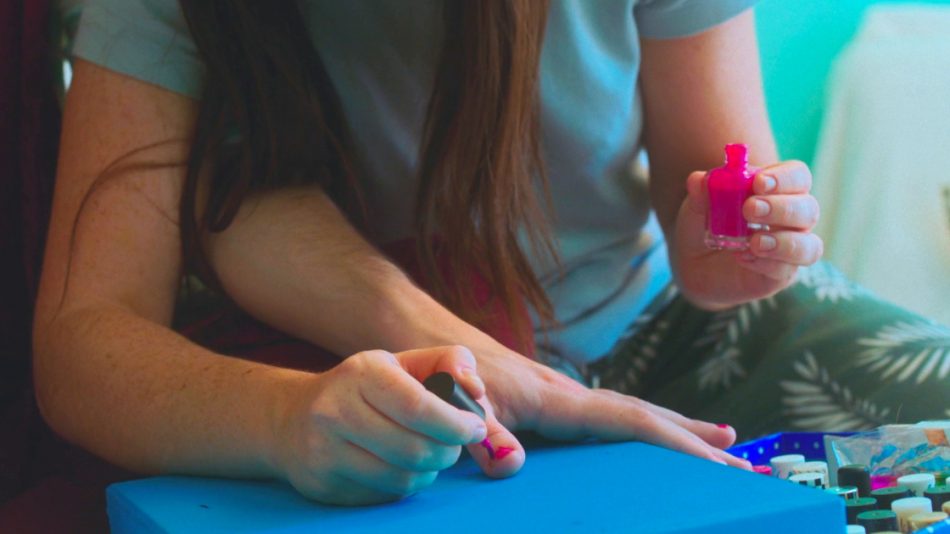 Over on our Vimeo (all close captioned) you can catch up with:

Marginalised by capitalist heteropatriarchy, LGBT people are more acutely aware of communal boundaries, the behaviours which implicitly open one up to rejection and harassment from a so-called loving society, even as progress is made. In a series of short films screening at the Rio Cinema, filmmakers probe the relationship between LGBT individuals and their place within larger communities.

Dungarees, directed by Abel Rubenstein, is both the briefest and simplest of the shorts on offer. It’s a glimpse into the life of a young trans man, his relationship with his boyfriend and their housemate. Tensions between the couple simmer after a game of FIFA, yet are ultimately navigated in an understated portrayal of the unspoken gendered pressures placed on trans men. 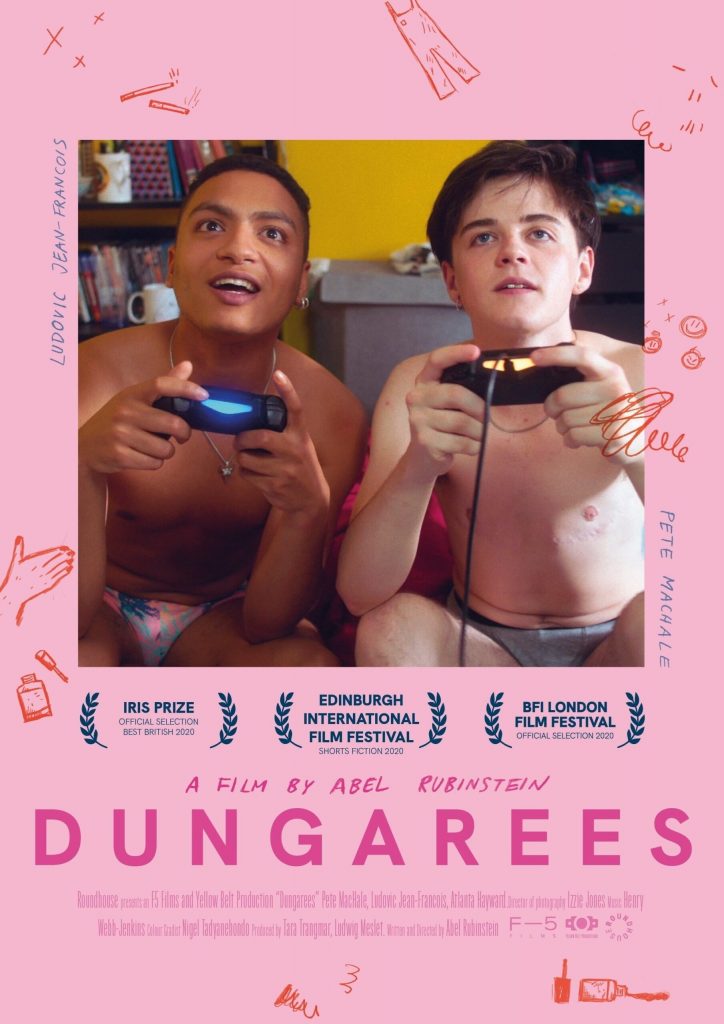 Some of the most vital LGBT films of recent years have been coming out of Brazil, and Bonde [The Gang], directed by Asaph Luccas, is no different. Chronicling three friends’ night out in São Paulo, Bonde portrays the ways in which anti-Black racism, fatphobia, and queerphobia are all continuously launched against the three heroines. Through the narrative of a girls’ night out, these societal horrors don’t overwhelm the film as the focus remains on the electric rapport between the main characters. Their love for one another is palpable throughout and it culminates in a final scene that is staggeringly beautiful in its intimacy. The contrast between sobering accounts of discrimination and the vibrant personalities of those it targets is most keenly felt in an instance of police harassment toward the end of the film. The tension of this moment is undercut by brash social media videos in which the characters give advice on what to do if the police stop you. Such smart creative flourishes give Bonde an undeniable spark. 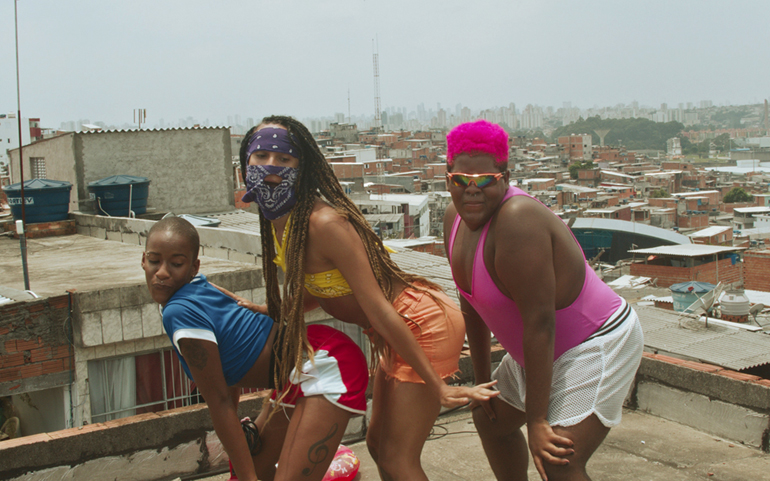 Writer-director Amrou Al-Kadhi’s personal fascination with marine biology informs Anemone, in which the young Anemio struggles to articulate their gender while facing pressure to conform to the feminine ideal their mother expects, and by extension their local church. It is only through a part-time job at a pet fish shop that Anemio finds the inspiration.

Even though notions of trans and non-binary identities are becoming more well-known, one of the earliest difficulties for trans children is simply having the means to express themselves. Anemone finds great beauty in the uniquely personal means by which they may find those expressions. In a TED talk, Al-Kadhi described their view of queerness through marine biology as “a kind of collection of interchanging formless bodies” and this is reflected in the swimming pool scenes of Anemone. There is a serene grace when Anemio is underwater, making it clear that it is in the blue that they are most in tune with who they are.

For progressive young people in the UK, there is a painful gulf between political potential and the social reality of the last ten years. One of the results of this is a marked interest in Brutalist architecture, in which utopian ideals of community were raised in concrete and let down by subsequent neglect. With Laindon, Maz Murray takes one such Brutalist project, the Laindon Shopping Centre in Basildon, for inspiration. It is a work about the legacy of the new towns movement and what could have been.

A young journalist enters a portal in the soon-to-be demolished shopping centre and finds an alternative reality in which a queer communist Essex defeated Thatcherism. Murray’s use of special effects is an aesthetic delight as patterns and animations look like they were MS Painted on to live-action footage, communicating a vibrant DIY spirit at the film’s heart. Murray grounds this hopeful fantasy with a connection to the local community, ending the film with a performance from the Basildon Gospel Choir. 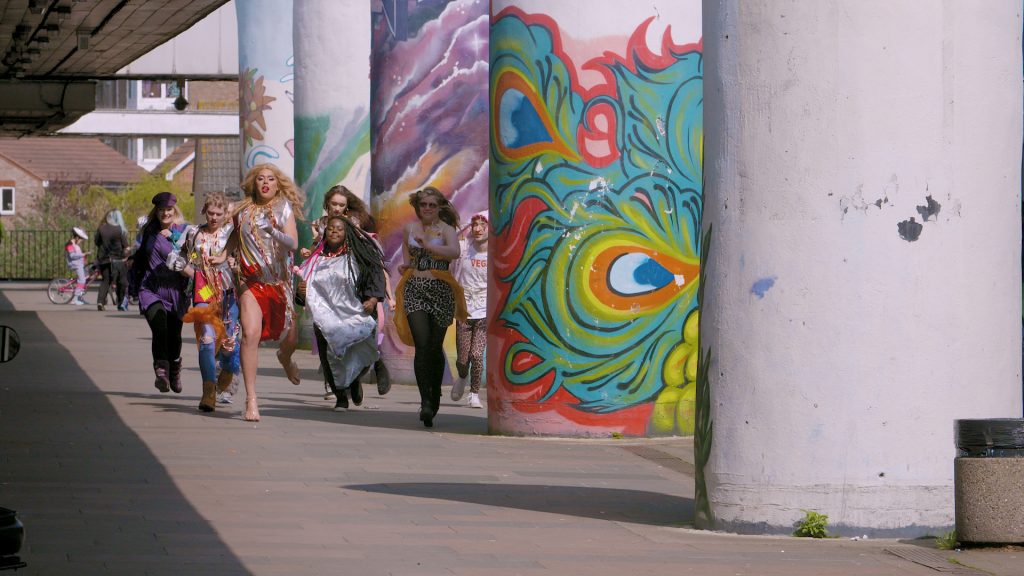 Driving back from a bout of dumpster-diving, Kat and Willow pick up a hitchhiking robot that’s part of a social experiment. The quirky premise of Trashy Booty, directed by Iris Devins, is underscored by a serious point about the precarity that many trans women like Kat and Willow face. Dumpster-diving is a practice driven by poverty and it is inferred that the threat of homelessness is a near-constant in Kat’s life. The robot’s repetitious phrase “This is an experiment in human kindness” is a reminder that human kindness is all too rare and must be forged through our connections with others. It gives emotional weight to Kat’s struggle and Willow’s affirmation of support.

What connects these shorts is a preoccupation with the relationship between LGBT individuals and the concept of community. No one can really live without the support of others. Dungarees, Bonde, and Trashy Booty all highlight the ways in which friendship and love are necessary to withstand the injustices of an oftentimes cruel society. Meanwhile, Anemone’s portrayal of family and church shows how these institutions can fall short of their promises of community, and Laindon dreams of what a better society could have looked like – perhaps even an idea of what still could be.

With support of the BFI, awarding funds from The National Lottery