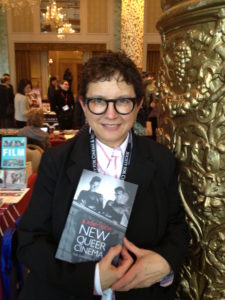 Scope and content: The event will take the form of an interactive, day-long symposium with ample opportunity for break-out sessions, conversations and audience participation, to reflect on the open curatorial practices developed by Rich. The discussions will move between theory, history and practical skills-sharing in order to explore all three aspects of curation as a practice, as it surveys five decades of alternative film and moving image work on the cutting-edge.

This event is free, but reserving a space is essential. Click here for details.

This panel will begin where Rich’s curation and criticism starts: with the instigation of a feminist film culture in the United Kingdom, around the Edinburgh International Film Festival, Screen journal and Circles distribution. It will consider the connections between activism, art-making and curation in the era, and how they generated transnational conversations with the American second-wave. Taking the idea of ‘formations’ as central, the panelists will examine how theoretical and practical manifestations informed each other and consider feminist curation itself – alongside the films it highlighted – as a critical and theoretical activity.

Rich coined the title ‘New Queer Cinema’ in 1992, to describe an assortment of Anglophone filmmakers, including Derek Jarman, Isaac Julien, Sally Potter, Todd Haynes and Gus Van Sant. By the start of the 21st century, queer formations in film were appearing on-screen in the work of Lucrecia Martel, Weerasethakul, Tsai Ming-Liang and Zero Chou. This panel will consider both the core of NQC and its transnational ramifications, looking at how non-Euro-Western filmmakers have expanded and challenged the range of LGBTQ identities co-opted by social democracies and described by Jasbir Puar as ‘homonationalism.’

This will be an informal discussion offering MA and PhD students interested in film archiving, as well as other curators, the opportunity to ask practical and theoretical questions, looking in depth at the nitty-gritty of curating alternative, archive and experimental cinema. Come and discuss your curatorial ideas!

Connecting to BIMI and the Essay Film Festival, this session will engage with Rich’s current pedagogical and curatorial focus on emerging forms of documentary that engage systemic injustice and foreground radical communities and solutions at a moment when documentary is more visible and popular than ever in the UK, with the growth of Sheffield Doc/Fest, the development of dedicated documentary screening spaces and programmes at independent cinemas, and the introduction of initiatives like The Guardian’s commissioning of documentary. Considering the impact of digital technologies, globalized media, austerity politics and emergent grassroots responses, the panelists will debate the knotty question of film and moving image’s impact on real-world communities and politics, and the strategic use of media tools by grassroots activists. Documentary is news – but it’s in danger of getting lost in the constant media stream, so how can curators and critics help urgent films stand out?