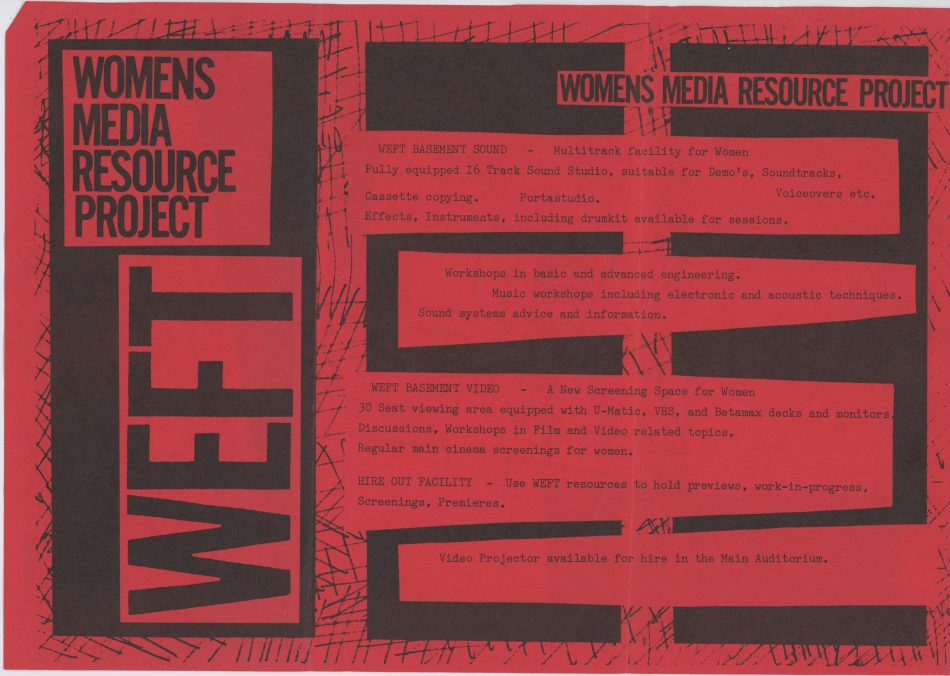 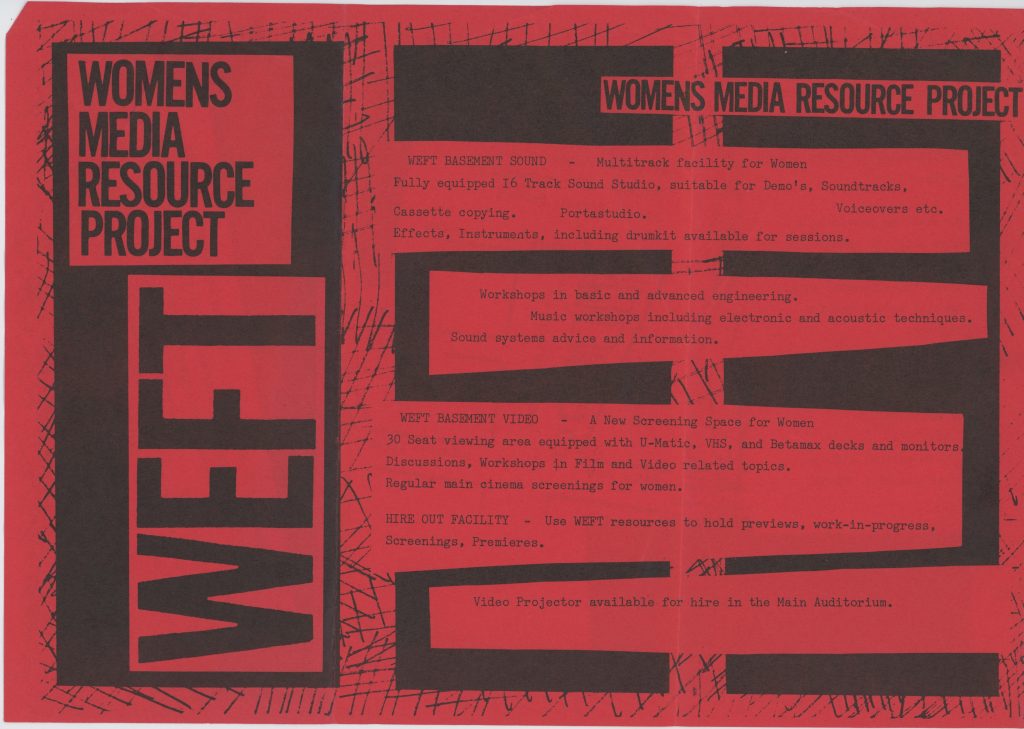 Our aim is to provide practice expertise using all forms of the media with the intention of creating an alternative to male-defined cultural propaganda. To create an expanding network of information and education by and for women. To provide and make accessible through outreach work our facilities to all women and, in doing so, to bridge the gap-dividing women by class, race, education, age, occupation, ability and sexual orientation. We hope to offer a friendly and relaxed workspace in which women can use the media resource. (Women’s Media Resource Project Archive, 1983)

Women’s Media Resource Project was set up to encourage and promote the role of women in the audiovisual media. The project incorporates THE SOUND KITCHEN, a 16 track sound recording studio, and the VIDEO LOUNGE,  a video screening space and film/video screening and discussion programme. Both facilities are in the Rio Cinema, 107  Kingsland High Street, London E8 2PB. (Basement). Our office is a few doors away from the cinema at 85 Kingsland High St. (Women’s Media Resource Project Archive, 1989)

History: The Women’s Media Resource Project (WMRP) also known as WEFT (a stitch in weaving), was initiated by a group of women video and sound artists and activists inspired by the feminist activism at the Greenham Common Women’s Peace Camp.  The word WEFT was taken from a Greenham song.

Established as a charity in 1983, the WMRP offices were initially at the Metropolitan Workshops before they moved to working with the Rio in 1984-1994. The group received funding from the Greater London Council (GLC) Women’s Committee, Hackney Borough Council, Greater London Arts and the British Film Institute.  They delivered an integrated practice, hosting with film & video screenings and running women only workshops and training in sound and video.

In July 1986 The Sound Kitchen was launched, the UK’s first women-only 16 track recording studio, which was housed in the basement of the Rio (the remnants of which are still there, it is now a storage cupboard). In 1987 they co-organised the first National Women’s Video Festival. Based at the Women’s Centre in Wild Court, Covent Garden , the festival ran across multiple London venues including the Rio Cinema.

The Sound Kitchen was the UK’s first women-only 16 track recording studio, housed in the basement of the Rio Cinema. Funded by Hackney Council and Greater London Arts. It opened on 24th July 1986. The WMRP organised training for women in vocal, studio engineering, electronic music. 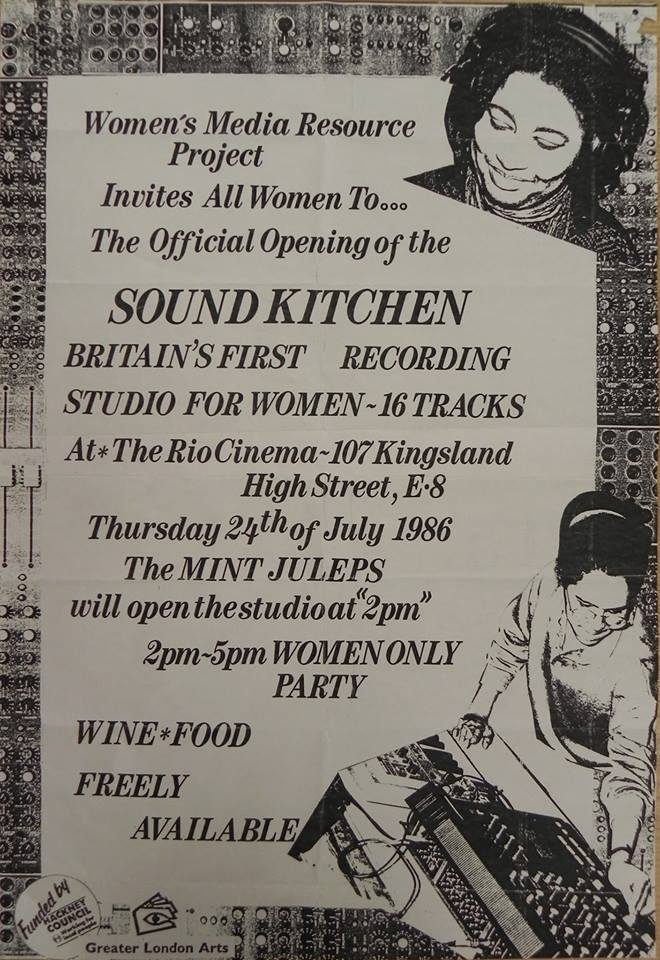 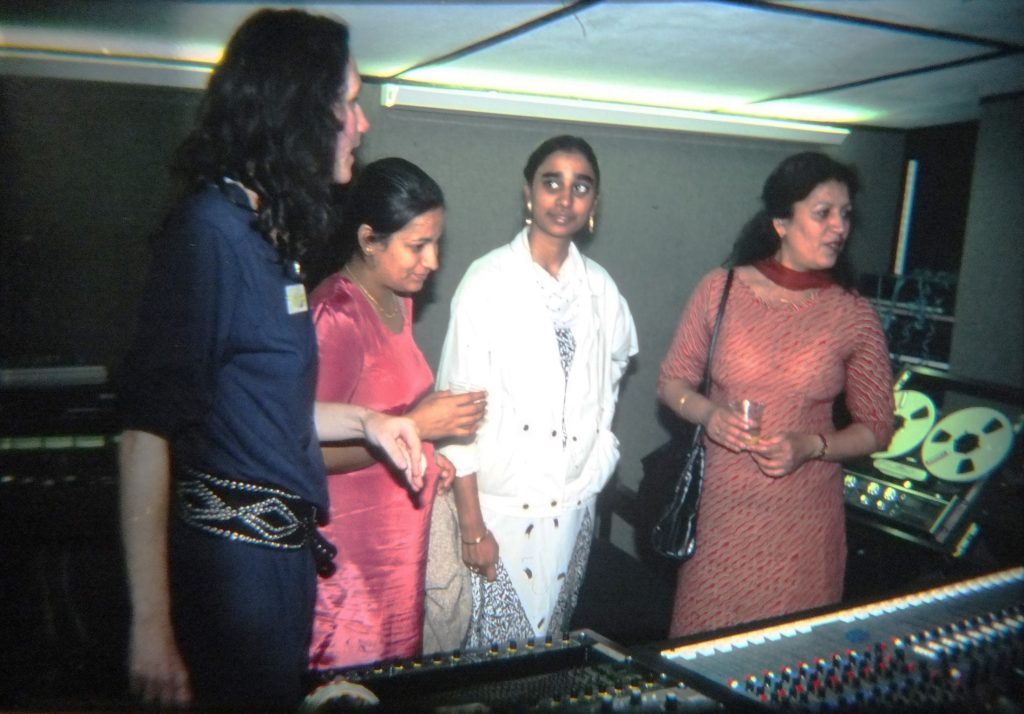 Opening of The Sound Kitchen with Siobhan Cleary and guests in 1986. Rio Cinema archive.

Film, video screenings + discussion with some of the WMRP members.